Women’s basketball looks to bounce back after tough exhibition loss 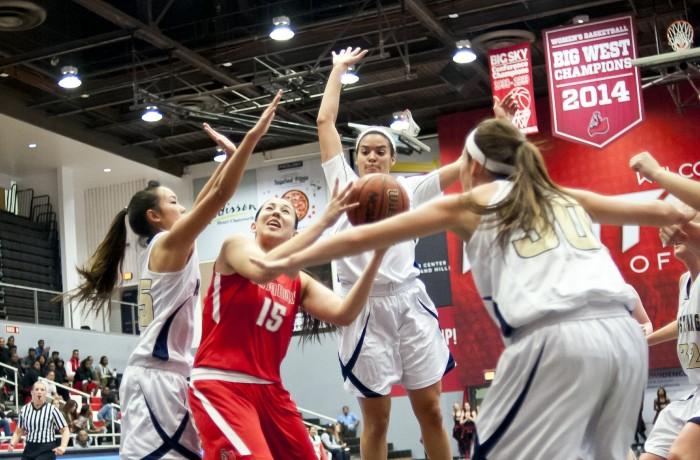 After an abysmal showing in their only exhibition game, the Matadors will try to get back on track against Saint Mary's. Photo credit: David Hawkins

The CSUN women’s basketball team will look to get back on track Friday in its season opener at home against the Saint Mary’s College Gaels.

The Matadors are coming off an 81-57 exhibition loss to The Master College Lady Mustangs on Nov. 6.

While the Matadors were out of sync against the Lady Mustangs, they did show some positive flashes.

Freshman guard Claudia Ramos had a game-high 19 points in her CSUN debut, shooting 41.7 percent from the field. She routinely attacked off the dribble and was able to get to the free throw line 12 times, hitting eight.

Senior forward Jasmine Johnson chipped in with eight points, four rebounds and displayed nice footwork in the post before getting in to foul trouble.

The Matadors will need to tighten up defensively as they allowed the Lady Mustangs to shoot 50 percent from the behind the arc in the first half and constantly gave up deep post position.

The Gaels come into the match having been ranked third in the West Coast Conference preseason poll. They did not have any exhibition games so this will be the first time they take the floor this season.

They will be led by senior guards Shannon Mauldin and Lauren Nicholson, both of whom were named to the preseason All-West Coast Conference team.

The Gaels are also 9-1 all time against the Matadors, including last year’s 73-63 win.

Tipoff is scheduled for 2 p.m.

Following the game, the Matadors will then take to the road for a three game trip.