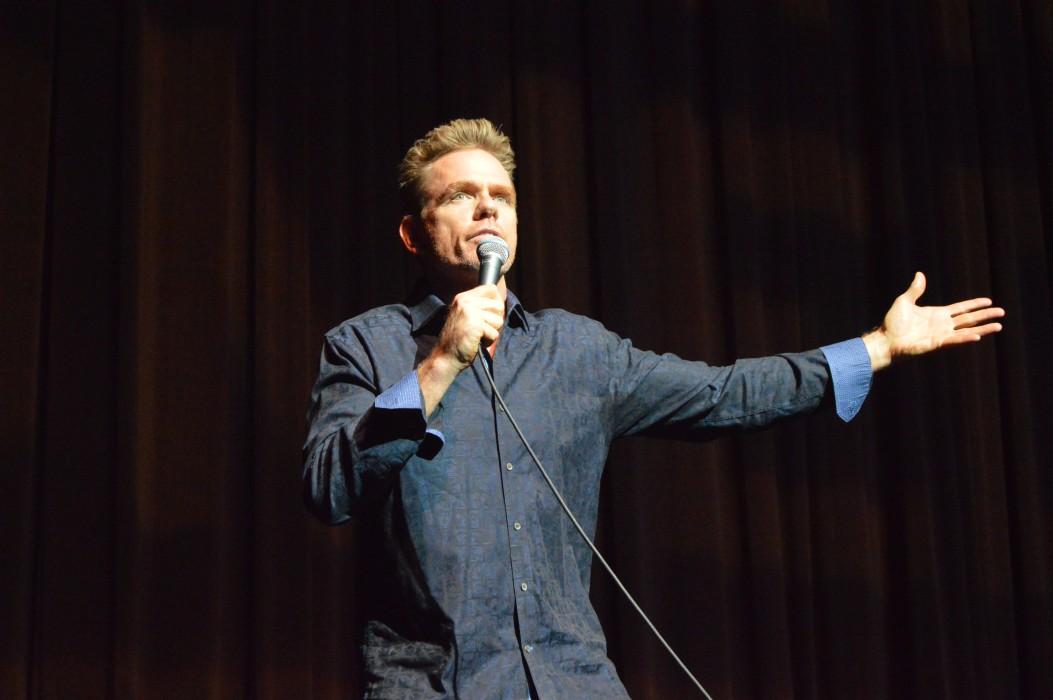 Despite a belated starting time and major changes to the comedian roster, the Student Veteran Organization and Associated Students’ “Big Comedy” at California State University, Northridge was a night of laughs and awareness for the local veteran community.

With the likes of comedians Jay Mohr, Jim Jefferies and Finesse Mitchell, Wednesday evening’s Big Comedy event featured some of the most notable funnymen still working the scene.

“Comedy provides relief and laughter can relive certain stress” said SVO President Paulo Iparraguirre. “Certain veterans have forms of PTSD and other war-related issues and comedy is one of the best things to relieve those stresses.”

Paired with CSUN affiliate Operation Comedy, Big Comedy served as an event to raise awareness for veteran outreach programs in the area as well as providing entertainment for the campus community.

“We wanted to reach out to veterans,” SVO student advisor Arturo Garcia said. After three months of collaboration, Garcia said the SVO and AS finalized efforts to bring the hit comedy show to the VPAC and gather a bigger audience. The show previously held residency at CSUN’s Pub Sports Grill, consistently filling up the place over two years. “The SVO wanted to help them connect and give them a college experience.”

The event was held at CSUN’s Valley Performing Arts Center for the first time this year.

“It’s been great working with Associated Students in getting to use this space on our campus for the event,” said Iparraguirre. “I think tonight’s event will bring great exposure to our veterans and create new opportunities.”

CSUN students, veterans and families of veterans clamored outside of the VPAC for the comedy show, waiting in the cold hours before the event began to secure a front-tier seat inside the venue.

“We wanted CSUN not to just be veteran friendly,” Garcia said. “We want CSUN to be veteran active.”

As the doors to the VPAC opened, ticket-holders stampeded inside, huddling around the doors that opened to the performance hall itself.

“Tonight’s show is a big deal,” said CSUN liberal arts major Alejandro Davila, 22. “You’ve got students, veterans and allies of veterans that are so excited to get inside and see some big names in comedy.”

Australian comedian Jim Jeffries was among the first comics to take the stage, receiving a standing ovation as he walked on.

Jeffries, who has an FX series and multiple comedy specials under his belt was easily one of the biggest names of the night.

“There are some really famous people back stage and you’re applauding me?” said Jeffries as he tried to get the audience to behave.

Jeffries was followed by Saturday Night Live alum and Fox Sports Radio host Jay Mohr who received an incredibly warm welcome from many of the veterans in the crowd.

“I don’t know what I can say or do tonight that will ever thank you men and women enough,” said Mohr. “But I’ll do my best to entertain you and make you laugh.”

Mohr’s set revolved around stories concerning fellow SNL stars Tracy Morgan and Chris Farley as well as his long-spanning career as a comic.

“You know I could’ve done something else had I gone to college,” said Mohr. “But I didn’t because I’m stupid.”

Between acts a donation bin was passed around in support of CSUN’s SVO, benefiting organizations on campus as well as those in the nearby community that had set up informative booths in the VPAC lobby.

Event goers also received literature on veteran outreach programs alongside their performance programs, encouraging anyone interested to further inquire about the programs.

Rounding up the night of comedy was legendary late-night comedian and former SNL star Finesse Mitchell, recently coming off of Ron White’s Salute to the Troops 2015.

Mitchell worked the first row of the audience with a limited set time, making those being picked on howl with laughter.

“I only have like 15 minutes so I’m just gonna do this,” said Mitchell as he made fun of CSUN students sitting up front. “Are any of you supposed to be here? One of these guys looks old and young at the same time – like he’s 22 and 49 simultaneously.”

As Mitchell finished his set, members of CSUN’s SVO came out and gave their thanks for those in attendance while reminding the audience once again to support their local veteran programs.

“Tonight’s goal was to make sure that students know about the SVO and that it’s here for them and our vets and most importantly that we’re not going anywhere,” said Iparraguirre.