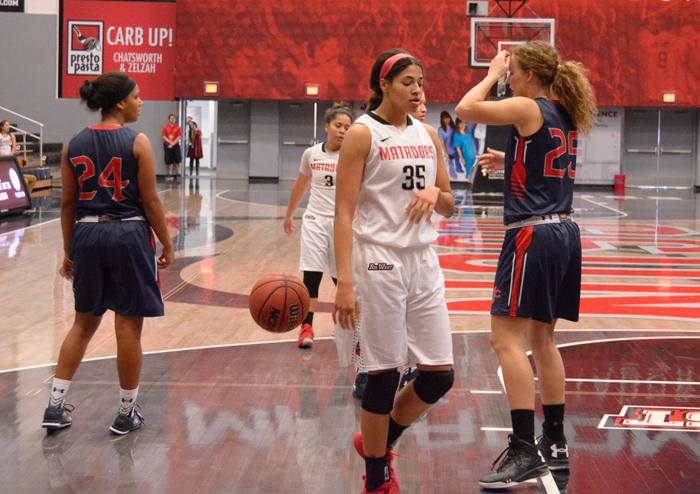 CSUN's seasons starts off with a loss to the Saint Mary's College Gaels by a final score of 59-93 at the Matadome in Northridge, Calif. on Friday, Nov. 13, 2015. The Matadors started the season with a slow first half and were unable to make a comeback. (Raul Martinez / The Sundial) Photo credit: Raul Martinez

It was ugly, even worse than last week if that was possible.

The CSUN women’s basketball team team trailed by as many as 38 points before falling to the Saint Mary’s College Gaels 93-57 at home on Friday evening.

The Matadors never led and fell behind 17-0 in the first five minutes of the game.

A slow start coupled with lackluster defense plagued the Matadors for the second straight game. They were never able to find a rhythm offensively, shooting only 25 percent from the field.

While the Gaels did not shoot well from the three point line, they took advantage of the Matadors weak interior defense and pounded the ball in the post all game long. They outscored the Matadors 52-18 in points in the paint and had five players score in double figures.

Once again, CSUN head coach Jason Flowers put the blame on himself for the team’s poor defense.

“It is my responsibility to get them to understand the importance of playing defense,” said Flowers. “The first two games the scores have shown I have done a terrible job at doing that.”

The Gaels shot 56.1 percent from the field, with many of their shots coming within close range of the basket. 10 of their 12 made shots in the first quarter were all layups.

Although the Matadors were out of sync for the second consecutive game, there were some positive signs they might be able to capitalize on moving forward.

Sophomore center Tessa Boagni came off the bench to score 10 points, often getting good position in the paint and displaying a soft touch around the rim.

“One of things coach always says is to start inside before we go outside,” said Boagni. “As the game went on we looked inside a lot more and that is when we started to get other inside shots or kicking it back out to open shooters.”

Also contributing off the bench was sophomore guard Vanessa Garner. She added 11 points and consistently attacked the rim, drawing fouls and getting to the free throw line eight times.

“Coach puts an emphasis on attacking and getting to the basket when we can,” said Garner. “If we do more of that we can definitely be a lot better.”

“With our inexperience it is a possibility every game right now that somebody else could be starting,” said Flowers. “We will talk about it as a staff, watch film, evaluate what needs to be done moving forward and we will select those players to start.”

The Matadors next game will be Tuesday, Nov. 17 when they travel to the University of San Diego to face off against the Toreros. Tipoff is scheduled for 6 p.m.