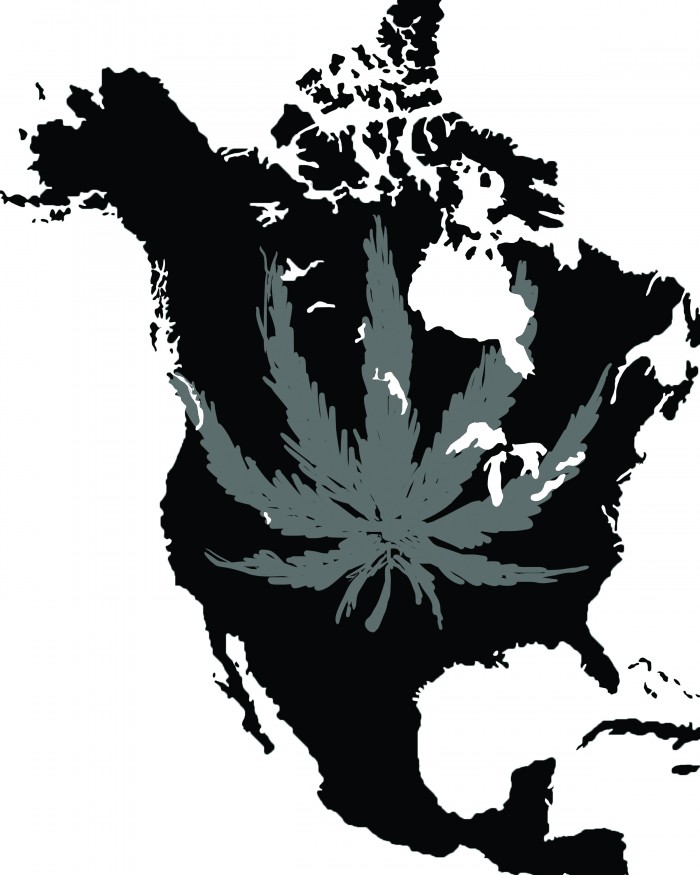 When it comes to marijuana legalization, the United States is stuck between two immovable forces. Canada has recently elected a prime minister who favors the immediate legalization of marijuana. Additionally, Mexico’s Supreme Court has recently ruled that Mexican citizens can grow, possess and smoke marijuana for personal and recreational use.

Even President Obama and former Presidents Bush and Clinton have admitted to using marijuana. Yet, with such a serious political shift towards the legalization of marijuana coming from both north and south of the border, why is the United States still pursuing its calamitous war on marijuana?

As an issue in the presidential election, the topic has tragically not gained much attention. It needs more attention. Currently thirteen states have expanded or passed laws decriminalizing marijuana use, and eighteen states allow medical use of marijuana. In 2014, there were over 700,000 arrests on marijuana related charges, that is more than one arrest a minute. Furthermore, marijuana legalization should be more of an important issue because in 2016, voters in several states such as Arizona, California, Hawaii, Maine, Massachusetts, Missouri and Nevada may consider legalization measures at the ballot box (Ohio recently voted no).

There are many reasons to argue for the legalization of marijuana, but I will argue three important ones: the government should not legislate what citizens freely choose to put in their body, the cost of enforcing marijuana laws and the possible adverse effects it can have on CSUN students.

I asked Justin Kim, junior and political science major, his views on the matter.

Agreed, government should not be in the business of telling people how to morally live their lives.

The cost of enforcing marijuana drug laws is massive. State and Federal governments spend approximately $20 billion a year enforcing such laws. Legalization solves the financial problem by reducing the costs of enforcement and increasing tax revenues from sales of marijuana. Harvard professor Jeffrey Miron estimated that $8.7 billion would be saved on law enforcement while another $8.7 billion would be generated by taxes on marijuana. Instead of wasting time and money trying to enforce marijuana laws, time can be spent efficiently somewhere else.

Marijuana laws can affect CSUN students too. According to a U.S. News & World Report article, “any student convicted of any federal or state drug conviction whether it be for the possession, conspiring to sell or sale of illegal drugs, can disqualify a student from receiving federal student aid grants and loans.”

More specifically, any CSUN student convicted of a drug charge will lose their federal and state funding. Furthermore, African-Americans and Latinos are approximately four times more likely to be arrested for marijuana possession. Thousands of CSUN students depend on financial aid, and it is an embarrassment that a student can lose his or her chance to attend college simply because they chose to consume a “drug” that is not more dangerous than tobacco or alcohol.

At the core of the argument for the legalization of marijuana is the idea of liberty. The government should not dictate what one puts into their body.

The best decision is to leave it to the individual. One has the right to make his or her own decision without being harassed or punished by the government. Government should get out of the business of telling us how to live our lives.