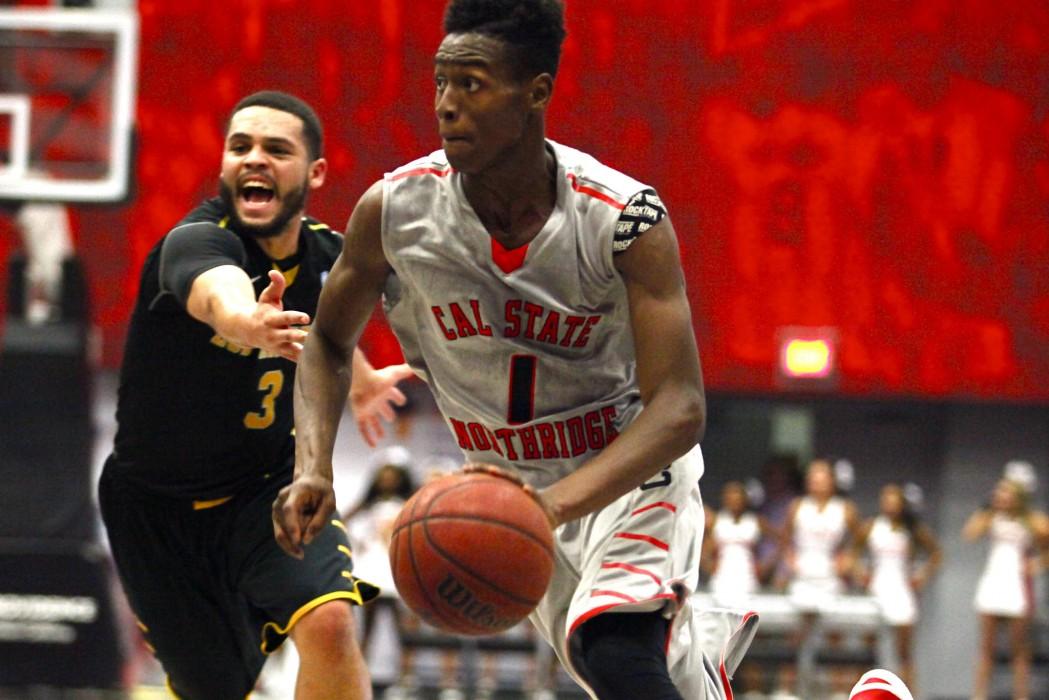 Freshman guard Micheal Warren was integral in CSUN's comeback victory, leading all scorers with 21 points. He was also a key factor in their win against Morgan State on Jan. 2, 2016. (Raul Martinez / The Sundial)

Following an opening game loss, the CSUN men’s basketball team picked up their first win of the year in a 72-67, come-from-behind victory against the Wright State University Raiders.

Early on, however, the Matadors appeared to be out of sorts, allowing the Raiders to jump out to an early 12-2 less than four minutes into the game.

With the game in danger of getting out of hand, CSUN responded behind a pair 3-pointers from senior forward Tre Hale-Edmerson and freshman forward Tavrion Dawson that sparked a 10-2 run that brought the Matadors within two by the 11:28 mark.

Although the Matadors averted disaster, they struggled with turnovers in the first half, giving it to their opponent eight times. As a result, Wright State was able to capitalize off of CSUN’s mistakes, scoring 15 points off of turnovers in the half.

In addition to turnovers, the Matadors struggled with perimeter defense once again. One day after allowing Northern Illinois shoot 8-14 from the 3-point line in the first half, CSUN let Wright State shoot 6-9 from beyond the arc.

Pedestrian defense and sloppy offensive play notwithstanding, the Matadors kept the pace slow, trailing 27-33 going into the halftime break.

Despite an auspicious finish to the first half, CSUN saw the beginning of the second half mirror the first, as they fell behind by 14 points less than 4 minutes into the half.

After falling behind by double figures again, the Matadors freshman guards Michael Warren and Jason Richardson scored eight straight points to bring them within six seconds after the 15 minute mark.

Wright State responded to CSUN’s freshmen by increasing their lead to double figures on two separate occasions, including a 61-51 lead at the 6:11 mark.

But with an 0-2 start staring them in the face, the Matadors responded by reeling off a 14-3 run over the course of the next five minutes to earn a 65-64 lead.

The rally was keyed by Warren who scored eight of the 14 points, and scored 18 of his team-high 21 points in the second half.

Also playing a key part in the run was an increased focus on the defensive end, as CSUN held the Raiders to 1-5 shooting and turnover during that five minute stretch.

Once CSUN regained its first lead since the score was 2-0 in the first half, they would not look back as they went 5-6 from the free throw line in the final 1:05 to ice the game.

Even though the Matadors displayed resilience and execution down the stretch, depth and bench presence is still an issue for them moving forward, as their reserves were outscored by 21 points.

Nevertheless, CSUN will look to pick up their second straight win before heading back to Northridge when they face the University of South Dakota at the Convocation Center at 11 a.m.