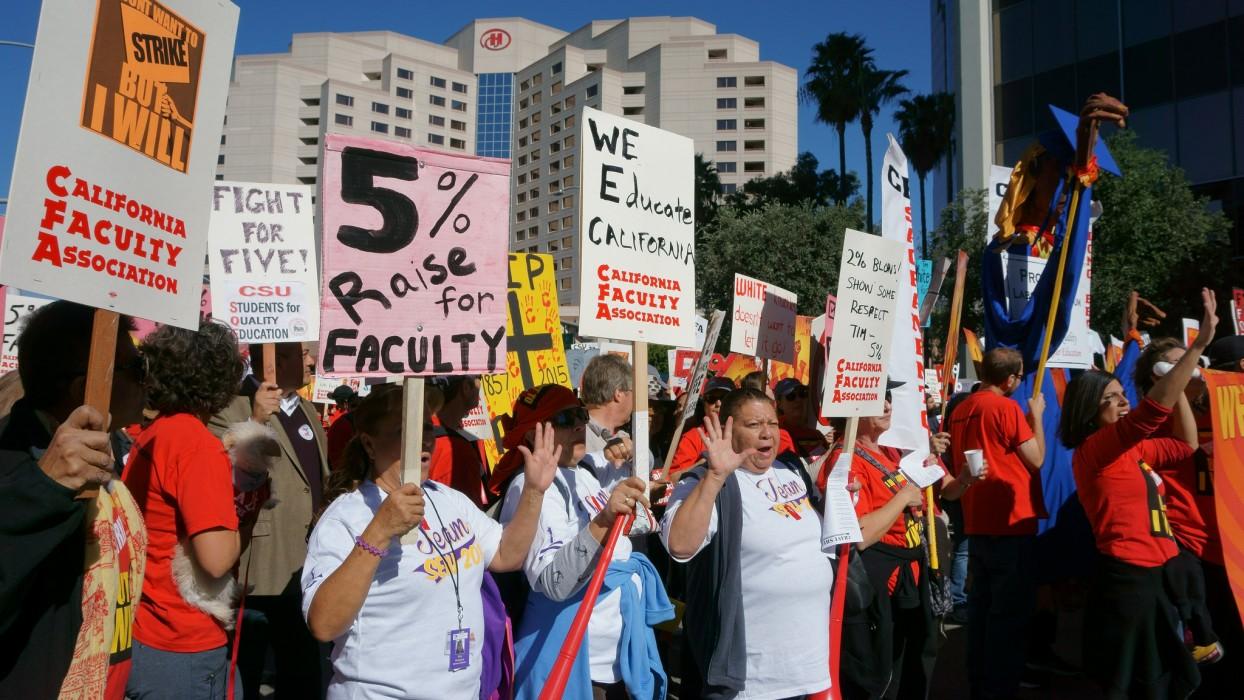 Streets were shut down and consumed in a sea of red shirts as over 1,000 California Faculty Association members, students and other supporters marched to the California State University Chancellor’s office in downtown Long Beach, Nov. 17 to demonstrate their discontent to CSU Chancellor Tim White.

While CFA members addressed their frustrations to the CSU Board of Trustees, other members and supporters gathered outside to protest.

The protest was a follow-up to the CFA’s vote to strike, aimed at demonstrating the power and support the CFA has if a strike becomes necessary.

Crowds of CFA members and supporters gathered at the corner of Broadway and Long Beach Blvd at 10 a.m.

Speeches were made while coffee, picket signs and red t-shirts were distributed to supporters in preparation for their march to the chancellors office.

Equipped with matching red shirts, a multitude of picket signs and a numerous amount of chants, protesters began their march down Ocean Blvd. at 11 a.m.

In the midst of their one mile march, protesters stopped at local hotels to support allied unions.

Golden Shore street was shut down as protesters approached the chancellors office, where they were met with media stations, music, food and drinks.

Politicians, CFA members, students, allied unions and other supporters gave speeches and played songs expressing their discontent with the CSU as protesters assembled outside the Chancellors office in the midst of the Trustees meeting.

Executive Secretary-Treasurer for the California Labor Federation, Art Pulaski, discussed the importance of working together that initially gained the CSU its additional $97 million, but noted how a brink of a strike is not a sign of progress.

“The CSU has more money and CSU will get more money. My colleagues and I know you are working below 2004 salary levels and that’s not right. You have been there through the lean years, you have sustained and supported a system, you have worked on behalf of California and stepped forward for its students and it is time for us to step forward for you,” Pulaski said to the crowd of protesters.

“School is built on a foundation between of both students and professors. So when professors are being screwed over, students are being dragged down with them,” Estrada said.

Member of SQE and Cal State LA student Daniel Osoy expressed his dissatisfaction towards the CSUs treatment to faculty and students.

“We are in the struggle together. This is not an issue of a lack of funding, it is an issue of a lack of priority. Neither students nor faculty are a priority, so we have to make ourselves a priority,” Osoy said. “So if this is what we have to do, if faculty have to go on strike, if students have to join our faculty on that strike, then we will do it.”

While most are focused on the “Fight for Five” movement, CSUN student and Internal Chair of Movimiento Estudiantil Chicano de Aztlan (MEChA) Raiza Arias believes that there are larger underlying issues at hand.

“A lot of this is a result of bigger systemic issues that affect all of us. I was a part of CSU hunger strike in 2011-12 so I am aware of the power these things have,” Arias said. “But to be honest I’d rather see a change in the system because we have gotten rid of the chancellor before and now we have a new guy and he’s just awful. That’s why I would push for a change in the system, that’s one subtext of this movement right now.”

After speeches were given, campaigners marched directly to the doorstep of the chancellors office and performed a series of marches, skits, dances and songs for the rest of the afternoon.

Despite the overwhelming support the CFA received, they don’t expect an answer just yet.

“I don’t expect them to come out and change their minds today, but I certainly hope they do in the near future,” Wehr said. “We would love for this to be over, the chancellor can solve this right now with a simple stroke of a pen.”