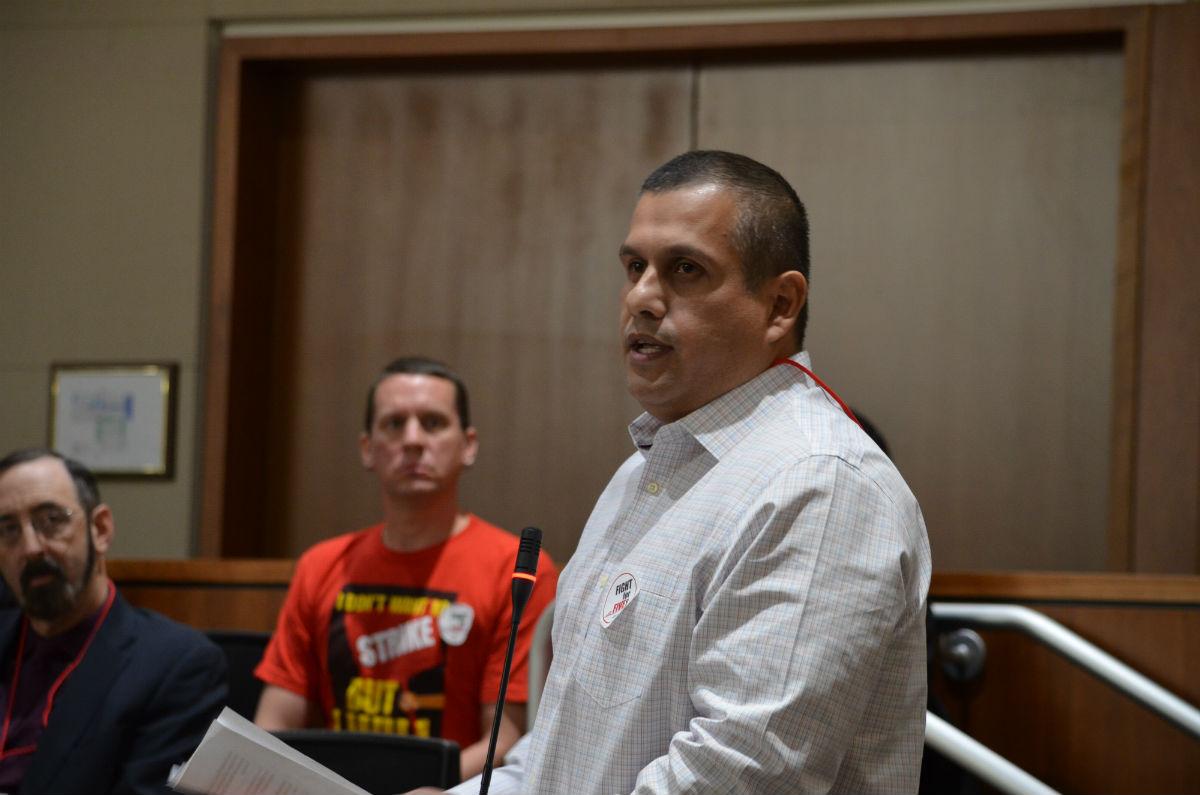 CSUN lecturer Antonio Gallo addresses the trustee board. Several members of the CFA spoke trustees and the CSU about why they were pushing for a 5 percent salary increase before the beginning of Tuesday's meeting in Long Beach. Photo credit: Daniel Shin

The CSU Board of Trustees resolved one employee bargain issue during a meeting in Long Beach on Tuesday, but remain deadlocked on its current bargaining struggle with the California Faculty Association.

A new contract between the CSU and the California State University Employees Union SEIU Local 2579 represents a variety of CSU workers such as healthcare workers, custodians and administrative clerks and was tentatively approved in November 2014.

The official ratification of the new contract means that members of the CSUEU are guaranteed salary increases instead of tying them to future state funding budgets for the CSU until 2017.

However, negotiations with the CFA remain at a standstill. The faculty union and the CSU have been divided over the CFA’s demand for a 5 percent salary increase.

Before the start of the CFA’s large demonstration in Long Beach, one student expressed her grievances over what she described as unfair compensation for faculty that has negatively affected students.

“Student success means that money is going towards students and their instructions and not to already high administrative salaries,” said CSU Dominguez Hills student and member of Students for Quality Education Jennifer Ovalle.

Ovalle said student success means that faculty must be compensated to offer sufficient assistance and advisement to students.

“So here we are, asking you members of the board and chancellor [Timothy] White to prioritize students and fund our education because faculty working conditions are student learning conditions and vice versa,” she said about seventh chancellor of the CSU.

Others, such as CSU East Bay student Pablo Garnica, urged both parties to reach a solution before another faculty strike was held.

“To all groups, even considering letting this issue go as far as a strike…please do not be selfish beyond the point of recognizing the students are suffering more than you,” Garnica said. “[Students] will suffer even more if a strike happens and classes are cancelled and programs and maintenance are defunded as a result of a raise.”

The CFA approved a strike vote on Nov. 4, arguing for the CSU to invest in its faculty after receiving increased state funding and suffering from a stagnation of faculty wages during the Great Recession.

The chancellor’s office initially rejected the CFA’s proposed 5 percent salary increase on the grounds that it would cost the CSU system an additional $107.2 million.

That position remained unchanged during Tuesday’s meeting. After hearing comments from the public, vice chancellor for human resources for the CSU system, Lori Lamb, presented the same expenses data it had shared in September but further contextualized where this money would be invested with their 2 percent proposal.

According to Lamb, the CSU committee on collective bargaining estimates at least 815 tenure-track faculty have been hired at CSU campuses for the 2015-16 academic year. This number increased from the 742 recorded from the previous year.

That translates into over $88 million more in faculty investments this year, which not only include salaries, but faculty support measures like more research funding and service support for new tenure-track instructors.

The first fact-finding session between the CFA and CSU is scheduled for Nov. 23.

Other items of note discussed at the meeting include the following:

Trustees approved the CSU 2016-17 support budget for submission to California Gov. Jerry Brown’s office. The budget would request $241.7 million from the state and $56 million from additional tuition revenue from increased enrollment.
The trustee’s committee on finance consent conceptually approved CSUN’s proposal to construct an on-campus hotel through a public-private partnership.