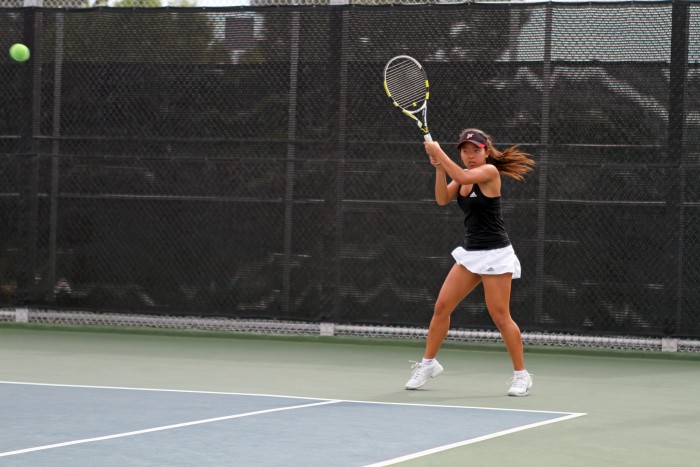 Junior Mickey Hsu was instrumental in helping the Matadors earn a victory in their home-opener on Saturday, Jan. 30. (File Photo/The Sundial)

Juniors Mickey Hsu and Kristen Poei won the the top doubles draw at the San Diego State Fall Classic II this past weekend.

To win the draw, they defeated Cal Poly, Colorado and San Diego State.

After combining to go 33-7 in dual competition during the spring and garnering consecutive All-Big West honors, Hsu and Poei defeated San Diego State 6-2 to win the championship after only losing eight games over three matches.

The duo of sophomore Kiryang Kim and freshman Skyla Alcon earned victories in the consolation side of the second doubles flight. Kim and Alcon beat UC Irvine and Colorado.

While in the same bracket, junior’s Vivian Lin and Mari Taslagyan were victorious over Colorado and Arizona.

CSUN also had other doubles playing over the weekend and were able to post wins.

The Matadors continued its success in the third singles flight.

Taslagyan earned victories over Air Force and Colorado while Kim was victorious over UC Irvine, Colorado and San Diego State. Bagumyan had a three-set victory over UC Irvine.

After several impressive performances, CSUN now has significant time off as they won’t be back on the court for competition until Friday, Jan. 15 for the Long Beach State Winter Invitational.