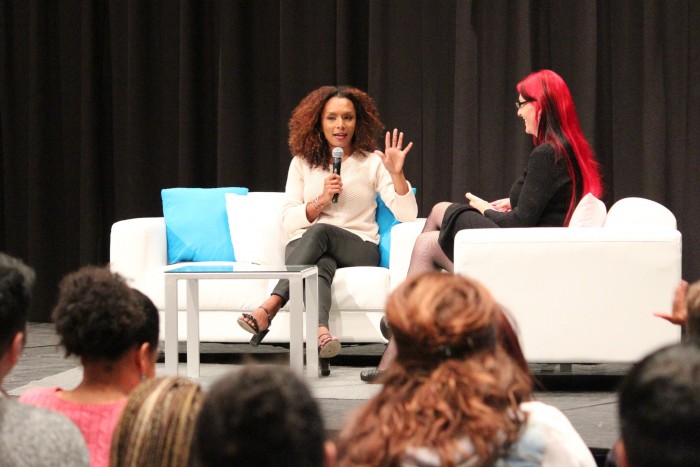 Author and transgender rights activist Janet Mock speaks on her experience and identity as a trans woman of color in the Northridge Center as part of Trans Week Awareness at CSUN on Nov. 16. (Christian Beltran / The Sundial)

Over 200 students gathered in the Northridge Center at the University Student Union for a discussion, Q&A and book signing with Janet Mock, the author of New York Times best-seller “Redefining Realness: My Path to Womanhood, Identity, Love & So Much More.”

As a contributing editor for Marie Claire and former staff editor at People magazine, she was listed in Advocate’s Most Influential LGBT People in Media.

She strives to guide the dialogue about trans people in mainstream media.

The discussion Monday evening was part of a week-long series of events at CSUN to celebrate and explore transgender identities and experience. The center was not open to the public and tickets were limited to two per student so they could bring in a guest. The Q&A was in the Northridge Center and continued at the Grand Salon with a meet-and-greetand book signing.

Mock spoke to a full room of students about what motivated her to share her story publicly through a memoir rather than selectively to a few people.

“After a while it just felt as if I was only expressing a fraction of myself and I was also dealing with having internalized so many of the myths and stereotypes about what it means to be a woman who is trans,” Mock said. “So much of that involves secrecy… involves believing that my experience is not, quote, unquote, normal or that normal is what the goal should be.”

With the recent hiring of the first openly trans White House staff member, the coming out of Caitlyn Jenner and the rise of Laverne Cox to fame, transgender is more visible than ever.

However, murders of trans people are at an all-time high at 15 this year. This is considering only 0.3 percent of the U.S. population identified as transgender in a 2011 Williams Institute study.

Also, 41 percent of transgenders reported attempts of suicide, in a recent survey, compared to 1.6 percent of the general population, with rates rising for those who lost a job due to bias [55 percent], were harassed in school [51 percent], had low household income, or were the victim of physical assault [61 percent] or sexual assault [64 percent], according to The National Center for Transgender Equality.

Mock said trans-women-of-color experiences represented in media are polarized and not varied.

“You walk on the red carpet, you’re on TV, you are being celebrated or, on the other end, you are in a casket, you’re an inactive body who is now being mourned by an entire movement that is saying your name,” Mock said. “But have never really given you any access to any kind of resource when you were actually an active body.”

She said that even though trans-womanhood is broad, the media is concerned with the transitioning narrative of transgender people.

“The kind of story that the media loves to tell is the story who, in my example, was perceived and presented as a little boy,” Mock said. “The media is enamored by that kind of narrative.”

Mock, at the event, said the trans community is grappling with telling the story of themselves which she described as complicated, messy, informative and inspiring at the same time.

“The real revolution will happen when trans people have more tools to tell their own stories,” said Mock. “When they’re not just hired as actors, or hired as reality-show talent.”

Students in attendance also weighed in on the issue after the discussion.

“The [trans] community is at great disadvantage in many aspects, no one talks about the issue on a serious tone,” said CSUN business major Afrah Clayton. “They are discriminated against within the LGBT community and in the open, general community.”