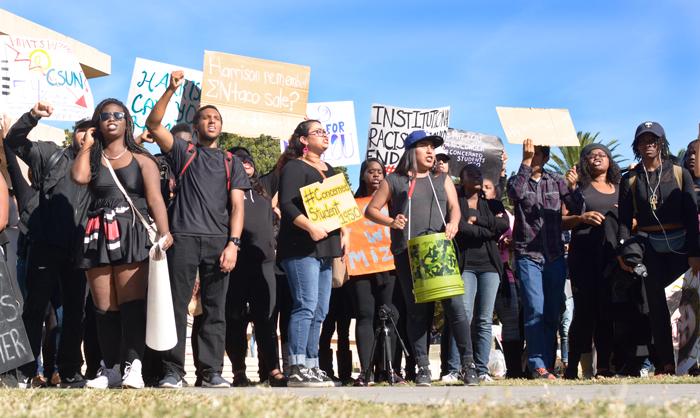 CSUN Students held a march across campus which ended up at the CSUN Oviatt Lawn to show the struggles of black and brown students face in university on Wednesday, Nov. 18, 2015. (Raul Martinez / The Sundial)

“This demonstration is not only in solidarity with University of Missouri, but also with Yale and other instances that have happened on multiple campuses throughout the country,” said graduating senior Melissa Elswick, 23 on behalf of all the organizations participating in the event.

In light of recent racial controversies at the University of Missouri, representatives of student organizations joined in coalition to bring awareness of the struggles black and brown students face on the collegiate level, according to a press release statement.

Around 100 students dressed in black and marched from four different locations: Sierra Hall, Bookstore Complex, University Student Union, and Arbor Grill, ending at the Oviatt Lawn for a moment of silence in support of the University of Missouri.

One of the primary goals for the demonstration was to address racial issues, retention rates, and declining admissions of black and Hispanic students with CSUN’s administration by delivering a letter to President Dianne Harrison.

According to a statement from the coalition of student organizations, the letter requested a meeting with President Harrison to understand what the university and other departments are working towards specifically addressing deconstructing and challenging institutionalized racism at CSUN.

“The empathy was with students in Mizzou; they had a call to action to start something like this,” said fifth year and internal chair for Movimiento Estudiantil Chicano de Aztlán de CSUN (M.E.Ch.A) Raiza Arias, 22.

“But later on we have to address the issues on our campus because there is a lot of outright institutional racism here, and the sad thing here is that we as individuals we try to say ‘hey you are hurting me, this is really problematic and harmful’ and we get shut down really quick.”

CSUN was recently recognized as a national role model of diversity by Minority Access – an organization advocating diversity in higher education, employment and research.

According to data from CSUN’s Office of Institutional Research, CSUN’s ethnic population constitutes more than half the school’s student population.

Even though CSUN has one of the largest and most diverse selection of ethnic studies programs in the California State University system, students representing multi-racial organizations on campus are still concerned with the lack of representation.

“With the ethnic programs we have, we feel there hasn’t been a push or focus on those sometimes, or the priority of making sure those are maintained, said Elswick. “We just want to sit down and see how we can improve that on campus. So that was our main focus to bring that to attention, not to say that there’s huge issues on this campus, but it does need to be consider in a lot of the decisions they make.”