CSUN women’s team have their eyes set on first win 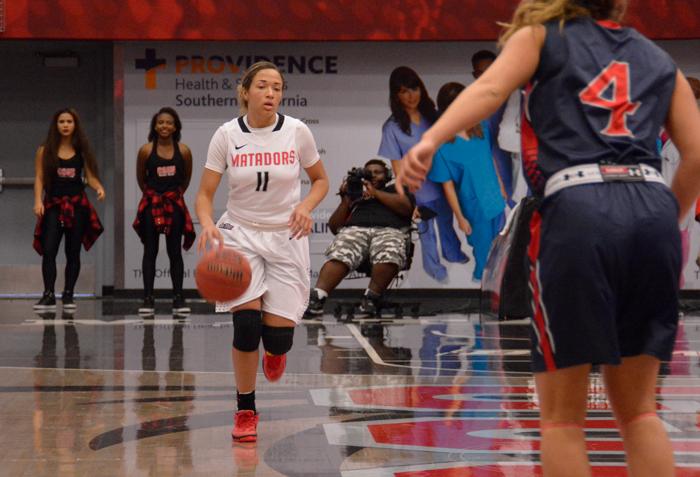 Freshmen Mimi Jackson brings the ball up the court in the the loss to the Saint Mary's Gaels by a score of 59-93 at the Matadome in Northridge Calif., on Friday, Nov. 13, 2015. (Raul Martinez/ The Sundial)

The Matadors will look to earn their first win of the season when they visit the University of Idaho Vandals this Friday.

In their previous two games, the Matadors dropped both games by over 20 points and struggled to get rebounds, being out rebounded by 10 in each game.

The Matadors will be facing a Vandals team that held their first opponent to only 42 points and dominated in rebounds.

With that said, CSUN will need to improve on both sides of the floor, as they have shot poorly, and played little to no defense for long stretches so far.

Slow starts have been one of the biggest problems for the Matadors this season, being outscored by double digits in the first three quarters.

The Matadors have been able to close out games, outscoring their opponents in the fourth quarter.

Freshman guard Nautica Morrow leads the Matadors with an average of 10 points a game and will be looked to in order to kickstart the offense.

The Vandals have a tough defense to crack leading their opponents in rebounds, blocks, and steals, so Morrow and the Matadors will have an uphill battle.

Their defense is led by front court senior Ali Forde who had 14 rebounds, four blocks, and two steals in their last game.

The Matadors struggling defense will also have an uphill battle in facing a Vandals offense that has three players averaging 10 points or more.

The Matador’s sophomore forward Tessa Boagni and freshman center Channon Fluker will look to slow down the Vandals offense as they lead the team in blocks and rebounds.

The Matadors will need to turn their season around quickly as the Big West Conference is looking highly competitive early in the year.

The biggest hurdle for CSUN going into Friday’s game is getting a hot start.

If they can improve their first half play, they should have a good chance of upsetting the Vandals.

Players to watch for are CSUN freshman guard Cheyenne Allen who leads the team in assists and could help get the offense going early.

The player to watch for the Vandals is Forde who will be looking to continue her defensive dominance as well as keeping pace offensively, as she is currently tied for second in most points for the team.