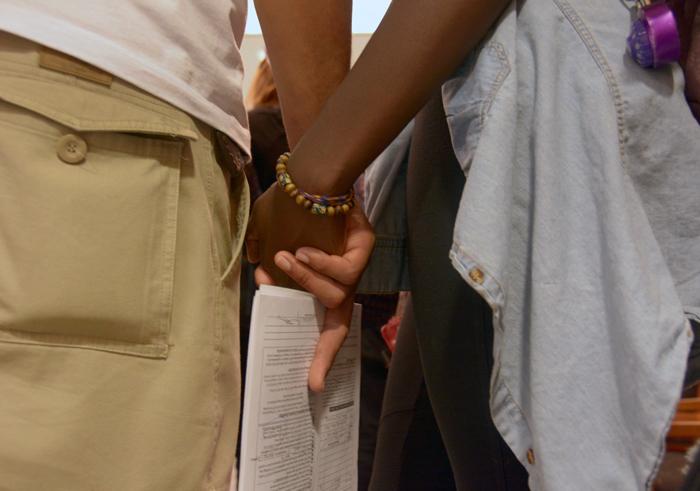 Students hold hands at President Dianne Harris office as CSUN students hand her a letter for a meeting request on Thursday, Nov. 19, 2015. (Raul Martinez / The Sundial)

Multiple student organizations, representing different ethnicities, delivered a letter to President Dianne Harrison requesting a meeting with her. Holding hands, the students walked through University Hall to the president’s office on Thursday, Nov. 19.

“The reason why we are here today is to give further notice to our president and try to make some things happen that need to go down,” political science major Sean Jenkins, 29, said. “We came … in a way so as to show that we’re not rowdy and that we’re not trying to just make change or get things done as a result of just because. There is a purpose to this.”

The letter follows Wednesday’s demonstration. The purpose was to bring attention to the decline of attendance of black and hispanic students at the school, as well as a decline in graduation rates, the groups said. They also came to discuss the funding of organizations, as well as faculty support, could help these groups overcome these obstacles, Jenkins said.

“We’re trying to make permanent change and immediate change going forward,” Jenkins said. “So that cats like me, and people not like me, will not be left in the shadows, not graduating, not getting support and not feeling comfortable on campus.”

The students stood in silence as they waited to deliver the letter to Harrison. Dr. William Watkins, vice president for student affairs, approached the students and simply said, “She’s in a meeting.”

The students, still silent, continued to wait until Harrison appeared from her office. The letter, sealed in a red envelope, was handed to her with a short explanation of its request for a meeting with her.

In unison, the students thanked Harrison and began to file out of her office.

After reaching out to Harrison in both silent and vocal demonstration, in small numbers and large, the various multi-racial student organizations emphasize their focus on equality throughout the entire campus.

“It’s not even a matter of just black and brown,” Jenkins said. “It’s trying to get everybody’s rights on equal standings so that we can all have the opportunity to get the best and most out of CSUN and education as a whole.”