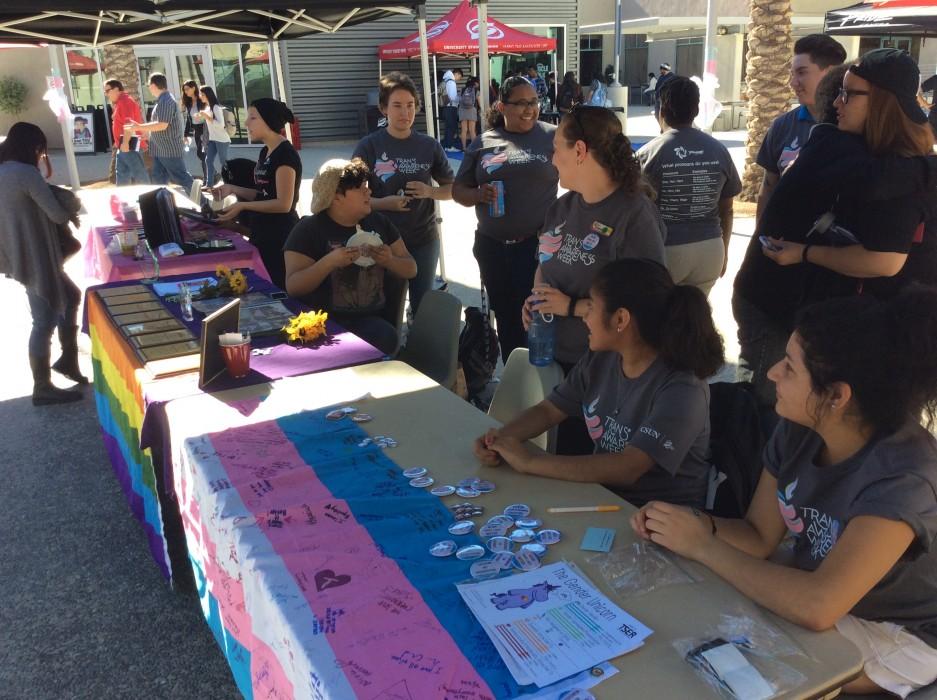 Students gathered at Plaza del Sol to celebrate and show support about transgender identities on the final day of CSUN’s Trans* Awareness Week.

Members of the Pride Center, V-Day and University Student Union helped organize the event. They set up different tables with information, prizes and craftsmanship on Nov.19.

Kinesiology major, Pride assistant and event leader Tyler Neroes, 20, said this events’ purpose has been among other things to show those students in need that there is support available.

“We want to show that we are here,” Neroes said.

The event was planned with interactive activities such as punching tickets to get a free meal, or win Trans* Awareness t-shirts. At one of the tables provided by USU staff, students could make their own scented candles.

“You can make candles to either keep or bring with you tonight for the remembrance ceremony,” Neroes said.

The ceremony was on Friday night and to payed tribute to transgender and gay people who have died.

“We will remember those who lost their lives, and we will also have a discussion on what to do so we don’t lose more lives.” Neroes said.

CSUN representatives of V-Day, an international movement to end violence against women were also present and handed out information and treats at their table.

President of CSUN’s branch of V-Day Francis Ramsel talked about the importance of raising awareness on violence against transgenders and gays, but most importantly towards women, especially on Valentine’s Day.

“On Valentine’s Day domestic violence and rape go up by 35 percent,” Ramsel said. “An alarming fact they want to tackle on. V-Day stands for violence, valentine, vagina and victory.”

For those who visited all ten tables, there were free tamales available around lunch time. Students enjoyed their meals as a Mariachi band came and performed in honor of the week.

Psychology major Diana Cabrera, 28, came to the event by recommendation from one of her professors.

“I think it’s great that they are bringing awareness to the issue of violence against transgenders,” Cabrera said. “I had no idea how much violence there was prior to these events.”

If there’s one thing that students should take home according to Neroes, it’s education.

“Learn more about what you aren’t familiar with. Get a better understanding of gender and sexuality because you will need it,” said Neroes.