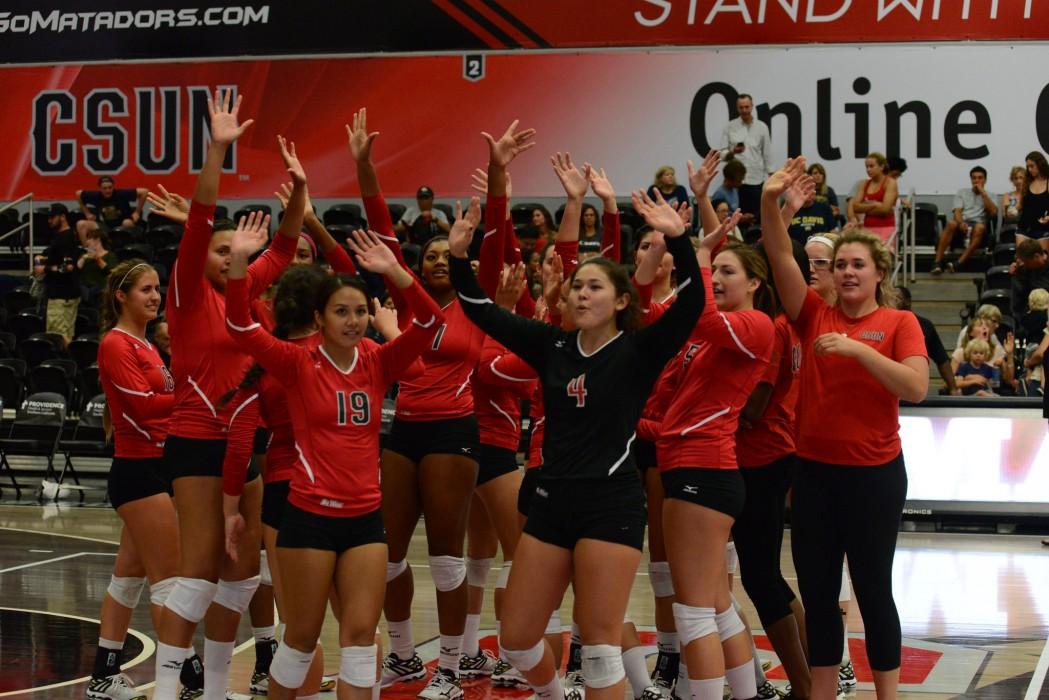 The Matadors celebrate a Sept. 26 victory against UC Davis. They were able to do the same in the final home game of the year against UC Riverside on Friday. Photo credit: Alejandro Aranda

“We’re a multi-faceted team, we have a lot of parts, we have depth in the positions and a lot of positions. We saw a little bit of that in tonight—changing setters, switching the outsides, changing the opposite,” head coach Jeff Stork said. “We’re able to do a lot of things with our team and I’m proud of the way they handled themselves after being down 0-2; (they figured) out how to play a little bit better.”

The first and second sets had the Matadors in the lead, but both became unpredictable with both teams taking a turn with it. In both sets, Riverside turned the tides of the game after tying the set at 11. In the first set, the Highlanders held on to their lead until the end. But at 17-20 in the second set, CSUN began to fight back going on a three point run to tie it at 20. The Highlanders immediately answered with two points of their before taking the set the exact way they had taken the first, with a kill.

“We really talked about what we should fix and we were all still confident after the break; we really came back stronger,” freshman outside hitter Aeryn Owens said.

In what was assumed to be the final set of the night, CSUN quickly fell to a 1-4 Riverside lead. After tying it at six, the Highlanders took a three point run which the Matadors answered with six back to back points. From here, CSUN held onto their lead winning the set with kills from both Owens and (the winning kill) from junior outside hitter Julie Haake.

“This time we were more patient, tried to stay positive, just play one step after another. I think we paid attention more to little details this time than last time,” redshirt freshman Nada Dragovic said.

The Matadors took set four by storm, claiming an early lead, but at 15 the Highlanders had it tied. Both teams then volleyed for the lead, but back to back kills from Dragovic at 19 set the Matadors ahead. A kill from Owens for set point, raised the crowd to their feet and a final Highlander hitting error sealed set four for the Matadors.

In the finale of the match, the Matadors pushed an early 4-0 lead. CSUN then remained ahead without question until the two had to switch court sides at 8-3. The Highlanders went on several two and three point runs and came within one at 8-7. Owens then delivered the final two blows to take victory: a kill for match point at 13-11 and the match winning kill.

As their final home game of the season, the Matadors celebrated Senior Night, honoring the two graduating seniors: outside hitter Cieana Stinson and defensive specialist/libero Alia Casino. Stinson was named to the All-Big West First Team in 2014, while Casino tied for sixth on the team with six aces in 78 serve attempts.

“It was very sad just to know that I will never be playing in here again and I’ve been doing it for the past four years, so I was just taken aback by the whole experience,” Stinson said.

The Matadors take on Cal State Fullerton in their final match of the season at Titan Gym at 7:30 p.m.