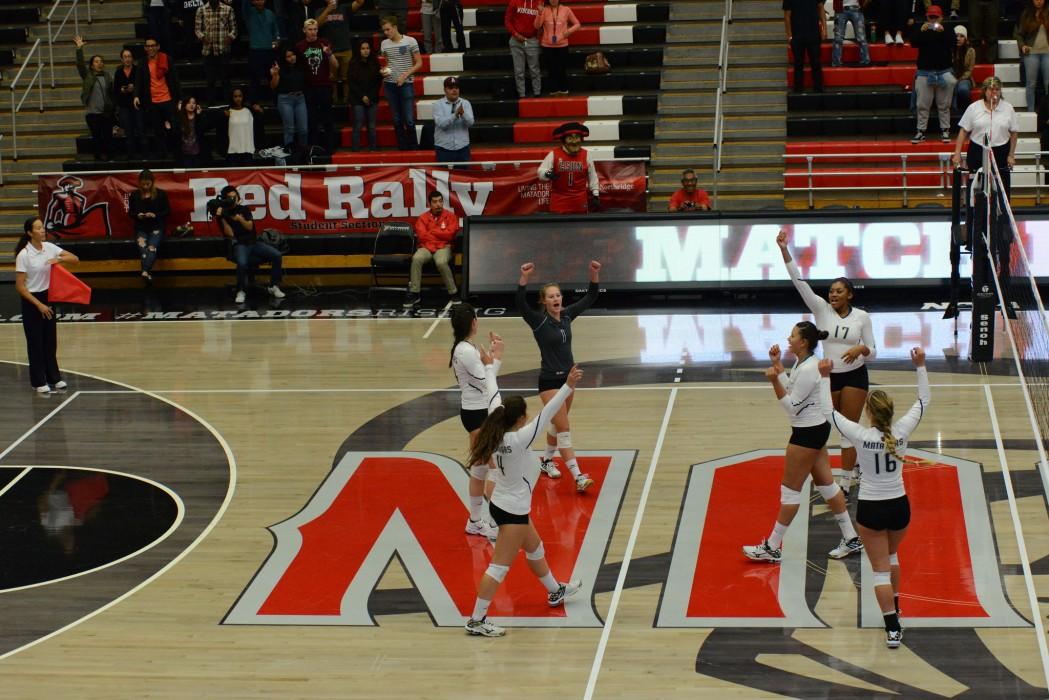 CSUN celebrates a sweep of Fullerton in the Matadome on Nov. 10. They defeated the Titans again 11 days later in a thrilling five-set match. Photo credit: Alejandro Aranda

At Titan Gym, CSUN fell in both of the first two sets, with their scores mirroring one another. In the first set, there were five tie scores almost all accompanied by three and four point Titan runs.

Tied at five during the second set, Fullerton took a two point run with back to back kills. This provided the small cushion the Titans would need to maintain their lead until the end of the set.

In what looked to be the final set of the match, CSUN fell behind early. Never behind by more than four, the Matadors battled back to tie the score at 23. A kill from redshirt freshman opposite hitter gave the Matadors their first set point.

The Titans answered, but a pair of kills from junior outside hitter Julie Haake and redshirt freshman Nada Dragovic won the set.

At 22-17 in the fourth set, the Titans looked as if they had ensured match victory again, but back-to-back kills from freshman outside hitter Aeryn Owens began a seven-point run that put the Matadors up 24-22. Fullerton answered with one of their own, but Owens delivered the final blow to seal victory.

In the final set, the Matadors reached an early 7-3 lead. At 8-4, the Titans took a 5-1 run to tie the score at 9. A block from Owens and sophomore middle back Rachel Diaz followed by a service ace from freshman defensive specialist Kristey Markle put CSUN back on top 11-9.

By 12, the Titans had it tied with a kill. Both CSUN and Fullerton volleyed the lead, tying it four more times before a Titan attack error followed by a kill from Diaz put the Matadors ahead by two, winning the match.

Senior outside hitter Cieana Stinson hit a match high 25 kills on 70 swings. Owens (.294 on 34 swings) and Dragovic combined for 26 kills and 67 attacks. Owens also added five digs and two solo blocks to her 16 kills, while Dragovic added three aces and 14 digs to her 10 kills.

The Matadors end their season 8-20 overall and 7-9 in the Big West.