Four factors that will decide CSUN vs. USC 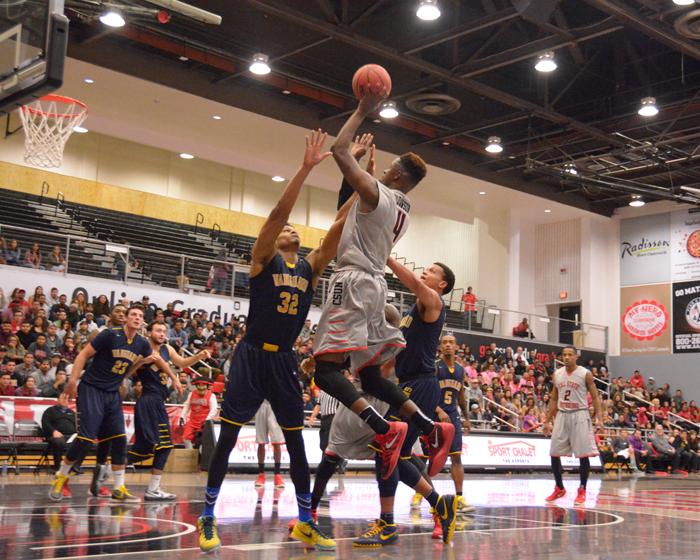 Sophomore Tavrion Dawson goes up for jump shot on the home opener win against the Vanguard lions by a final score of 52-72 at the Matadome on Wendesday, Nov. 18, 2015. Dawson had 10 points in the vicotry. (Raul Martinez / The Sundial)

The CSUN men’s basketball team kicks off a three-game road trip when they travel to face the University of Southern California Trojans on Monday, Nov. 23.

CSUN is currently 2-2 on the season, while USC heads into the matchup with a 3-0 record.

Before the season, CSUN men’s basketball head coach Reggie Theus was coy about the matchup.

“It’s about competing,” he said. “It’s about really getting in there and having a chance to win, and giving yourself a chance down the stretch and seeing what happens.”

However, in the days leading up to the game, Theus has demonstrated a more confident approach.

“The team that plays the hardest is going to have a chance to win,” he said. “Talent-wise, they won’t be head and shoulders better than us.”

But against an undefeated Pac-12 Conference foe, the Matadors’ will need a little more than effort to leave the Galen Center with a victory.

For CSUN to have a shot against the Trojans, they will need to shore up their defense against a USC team that averages 91.3 points per game.

With that said, it is imperative that the Matadors play better defense along the perimeter, as they have allowed opponents to shoot 41.5 percent from deep so far. Conversely, the Matadors shoot 34.7 percent from the 3-point line, making only 17 3-pointers over the course of four games.

The brunt of that responsibility will fall on guards Landon Drew and Jason Richardson. Although Drew is only averaging 2.3 assists per game this season—partly because of a foot injury—he still serves as a consistent playmaker for CSUN, and will need to get Richardson to involved, as he is the team’s leading 3-point shooter with five made on the season.

On the other end of the floor, Richardson, Drew and sophomore guard Micheal Warren will have to contend with the Trojans’ two leading scorers, sophomores Jordan McLaughlin and Elijah Stewart, who are averaging a combined 37.6 points per game.

2. Who Controls the Boards

If 3-point shooting wasn’t enough of an issue, the Matadors will also have to deal with USC’s size and rebounding ability.

The average height among players who have played in all three games and average over 10 minutes per game for the Trojans is roughly six-foot-nine. When that same metric is applied to the Matadors, the average is height is about six-foot-six.

Although size doesn’t necessarily equate to rebounds, USC nearly averages nine rebounds more per game than the Matadors do.

CSUN will look to six-foot-eleven senior center Olalekan Ajayi to close the rebounding gap, as he is coming off of a double-double against Vanguard University, and leads the team in rebounds, averaging 7.3 per game.

It’s no secret that CSUN has been struggling with all sorts of depth and fatigue issues, since guards Jerron Wilbut and Aaron Parks were ruled out in the beginning of the season.

That problem may rear its head again against the Trojans who play a much faster brand of basketball than the Matadors do.

The speed and pace of the game may become a factor for CSUN, as they have routinely rolled out only seven players in close games this season.

Moreover, the Matadors’ bench hasn’t been effective either. They have only scored 40 points over the course of four games, which doesn’t spell success against USC’s reserves, who have scored 55 points in three matches.

4. Points In the Paint

As mentioned before the Matadors struggle on between the 3-point lines. As a result, they manufacture shots that come inside of the key and at the rim often.

CSUN ranks fifth nationally in percent of shots coming at the rim, with 56.9 of their attempts coming inside of five feet.

The Matadors’ determination in taking close shots provides a unique battle as the Trojans are the second-best team in the country in terms of blocking shots at the rim, as they send back 29.8 percent of opponents’ shots in the area.