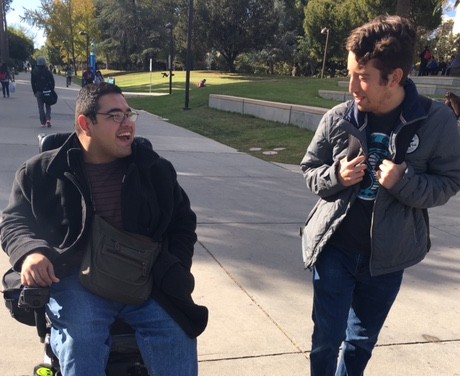 Jose Hernandez was born prematurely at seven months with cerebral palsy because of a lack of oxygen to his brain that occurred during his birth. It resulted to a chronic condition that disables an individual’s muscle and body movement. Despite his condition, 24-year-old commutes in the Los Angeles MetroLink two hours away from home to attend the university of his choice.

“My dream of attending a university with a major in Cinema and Television Arts has finally come true despite my circumstances. I want to let the world know that a wheelchair does not have to become a barrier to create a brighter future. I have come a long way to get to where I am at today. I am more than grateful to have attended a university that provides help for students with disabilities,” said Hernandez.

Hernandez will be graduating with a bachelor’s degree in Spring 2016. He is a student who does not only face the challenges of getting to school but surpasses his condition in order to follow his ambition.

Cerebral palsy can not be cured but accepted and worked with while trying to build friendships with others. It is difficult to create a friendship with students because the two-hour commute shortens the time he is present on campus. He spends his time wisely by reading and doing homework in the train.

But on the downside, Hernandez believes his wheelchair has intimidated people to approach him like any other person. He goes through campus without bothering anyone or asking for help. He is a student who simply wants to have social interactions with others but can not because of his condition.

“I wish to have more time to join clubs on campus but the train’s schedule holds me back from expanding my social life. On the other hand, I do not think becoming involved will enable students to talk to me either way,” he said.”This wheelchair does not mean I am unapproachable. I am a good person who simply wants to have the same university experience as everyone else,” said Hernandez.

He socializes with other disabled students who understand how difficult it is to make friends. People who have personally interacted with Hernandez have become more than grateful to have met someone like him.

Andrew Quezada, a senior with a major in Cinema and Television Arts, met Hernandez in a screenwriting course and became good friends.

“Jose always wants to help someone, whether it is through school or simply asking how their day is. He is always there with a positive attitude and a smile,” said Quezada.

Hernandez’s supervisor, Alex Karova, mentioned the difference he has made at the CSUN Script Library.

“It is inspiring to see someone who has every reason in the world to not go to school, yet he refuses and goes towards his dream. He is deemed with love and everyone at the Script Library responds to that. The world is ready for a Jose. If we did not have one we’d need one,” said Karova.

Hernandez considers his mother to be the most important person in his life. Since he is an only child, his mother is his best friend, one who is always there for him and keeps him company at school by calling him on lunch breaks.

“My mother is my rock. She in my inspiration to keep moving forward,” Hernandez said with a smile on his face.

Hernandez is working hard towards graduation to make himself and family proud. Adjusting to commuting and people’s views has always been challenging but he is determined to stay focused and keep moving forward.

“My wheelchair has become a part of me ever since I was born. If people are not willing to build friendships with me because of it, I accept it. I would first like for everyone to give handicapped students a chance to get to know us,” he said, looking at his wheelchair. “We are people just like the rest of society. We want to have fun and expand our circle of friends. Don’t be scared to reach out to us.”