Men’s basketball travels to LMU looking to even record 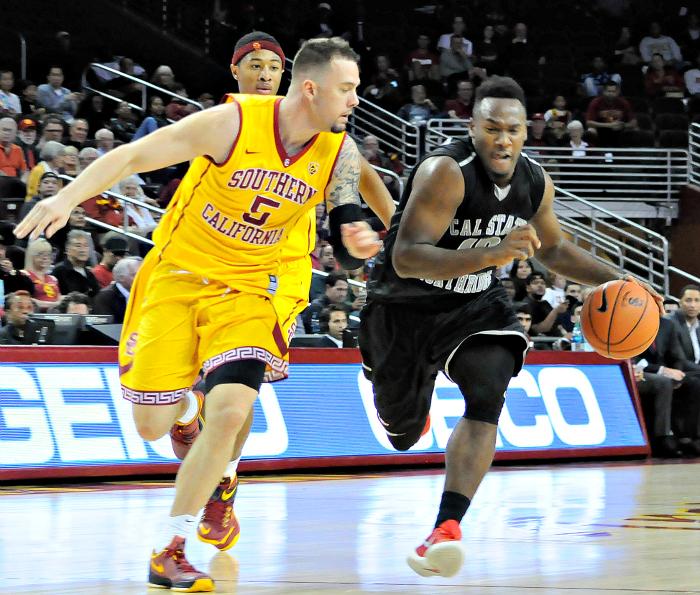 CSUN freshman guard Jason Richardson takes on USC junior guard Katin Reindhardt as the Matadors faced the Trojans at the Galen Center on Nov. 23. Richardson would tally a team-high 18 points in CSUN's 96-61 loss against USC.

After falling to the University of Southern California on Monday, CSUN (2-3) will look to get back on track when they continue their road trip against the Loyola-Marymount University Lions (2-2).

Continuing his strong start to the season with a team-high 18 points in the previous game, freshman guard Jason Richardson will be vital in the Matadors bouncing back.

Richardson averages 16.4 points per game and five assists per game, both good for tops on the team.

Despite the similar records, the Matadors look a remedy for their road woes this, as they are only 1-3 away from the Matadome.

CSUN has been outscored by 22 points (184-162) in the first half but with LMU’s poor defense, the team should have opportunities to take control of the game early on.

The Lions are currently allow their opponents to shot 46 percent from the field, to their 39 percent. Their opponents are also converting more three-pointers at 35 percent while they are shooting 31 percent.

CSUN will have to keep the Lions off the glass as they slightly average more rebounds per game (36.5) than CSUN (35.8).

Both teams enter the game committing the same amount of turnovers, LMU averages 12, while CSUN commits 12.6 per game.

Defensively both teams are about equal in steals and blocks; the Matadors are averaging six steals and 2.4 blocks per game, compared to the Lions’ 8.3 and 2.8.

Brown leads the team with 15.5 points per game and Jacko is second with 13, they are the only LMU players averaging double digits in scoring.

Unlike the Lions, the Matadors have shown early in the season to have multiple scoring threats.

Richardson will have support on the offensive side from a pair of sophomores.

Sophomores Tavrion Dawson and guard Micheal Warren average 12.8 and 12.6 points per game. Warren’s aggressiveness towards the basket has been paying off so far.

Warren is shooting 72 percent from the free-throw line as he as made 24 of his 33 attempts, all team-highs.

And against the Lions, they will need the duo to attack the basket and convert.

The Matadors look to bounce back when they take on the Lions at 6 p.m., on Wednesday, Nov. 25, at the Gersten Pavilion.