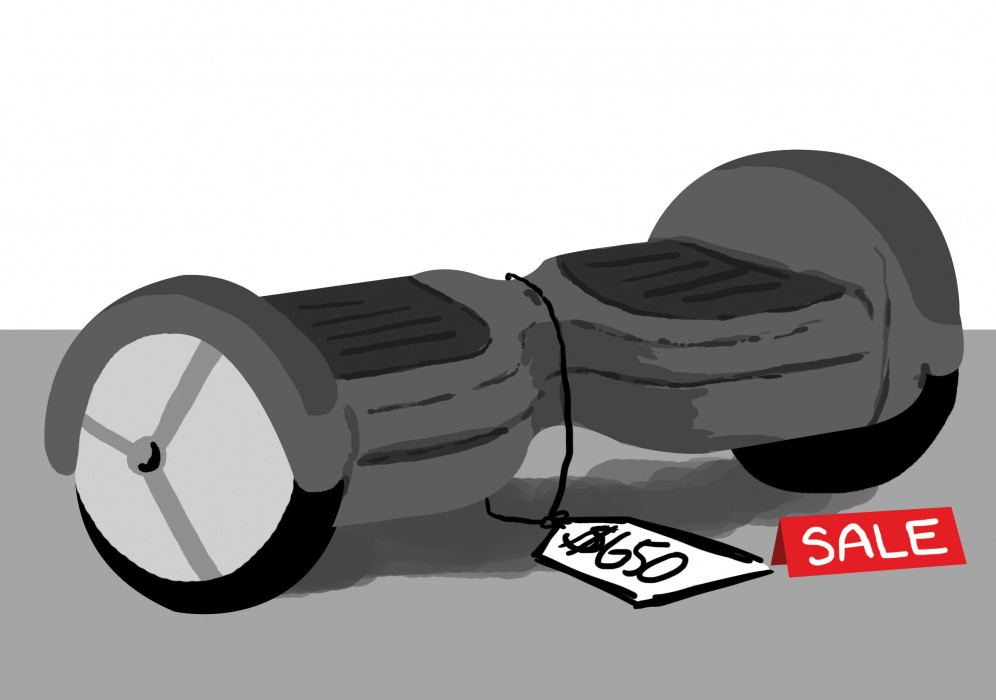 The hoverboard or hands-free Segway has become all the new craze, with celebrities joining on the bandwagon. Most notably the rapper Wiz Khalifa who was arrested at the airport riding his gold IO Hawk.

Whether you’re a fan or not, certainly motorized transport is becoming commonplace.

The term hoverboard is misleading, since you’re not actually hovering but balancing on a motorized scooter. In addition, balancing on a hoverboard or more specifically the IO Hawk has proven quite a feat, which then ensued a string of hilarious YouTube videos by BuzzFeed.

The hoverboard is an attractive item because the IO Hawk weighs 22 pounds and goes up to six miles per hour. In addition, it’s easy to use because the direction and speed are controlled by the pressure applied when balancing. After 10 – 12 miles of travel the IO Hawk needs to be charged.

The small hoverboards can move weight up to 220 pounds and some can reach speeds of 10 miles per hour. It has lights in the back to signal pedestrians and has a price of $1,049 on Amazon. The hoverboard is lightweight, travels at a safe speed, and can be charged, which makes it the perfect traveling device for college students.

Is the hoverboard innovative? Well, there is a complicated lawsuit pending regarding this issue. Different companies have claimed they created the idea. In the beginning, Shane Chen, an American inventor, produced the Hovertrax and was awarded a patent in 2014.

The billionaire and investor of the Hovertrax, Mark Cuban, declared he would sue anyone who would copy Shane Chen’s designs. When the IO Hawk came out, the battle ensued nasty Twitter comments.

In addition, Cuban threatened to sue Walmart for stocking IO Hawks. While the dispute between Hovertrax and IO Hawk was ongoing, Segway sued Hovertrax.

Segway was bought by a Chinese company called Ninebot and claims Hovertrax copied their designed from their Solowheel product.

So maybe the hoverboard idea is not necessarily the most innovative, since three different companies are battling for the title of “creator.” Even Lexus has it’s own hoverboard that actually hovers. Also do not forget the other companies Hendo Hoverboards, WalkCar and PhunkeeDuck.

If the lawsuit is successful it would stop any inventions that have the following attributes – “an automatically balancing vehicle having a headroom monitor,” “a platform which supports the user,” “a ground-contacting module” and “a motorized drive arrangement.”

This could potentially reverse the development in the hoverboard market and remove all the products from the shelves including Hovertrax and the IO Hawk. This definitely would hurt customers, since all the competition is gone and the price can be set at any value.

Now some consider the hoverboard to be dangerous. The owner of the Segway company, Jimi Heselden, actually died in a freak accident using one of his own products, thus motorized transportation can’t be taken lightly.

Since hoverboards are new to the market, few laws have been regulating their use in the U.S. except in airports apparently. However, hoverboards have been banned from use in public in the United Kingdom. According to the legislation, they consider it unsafe on the road and sidewalk, thus it has no place in public.

Just as some find the hoverboards dangerous, others question the effects on health. For instance, people who use an IO Hawk or Hovertrax will no longer be walking.

How will that affect the obesity rates in America? Instead of bicycling or walking, will everyone be using motorized transport?

The only healthy exercise college students probably get is walking. In addition since it does not move fast, it may not be the most reliable source of transportation.

It might have a positive affect on car use. The expansion of alternative forms of transportation, might actually reduce parking congestion – especially at CSUN.

Even though CSUN does have a ride sharing program, finding a parking space is a nightmare. So hoverboards may not be so bad after all.

Whether you love or hate hoverboards, you can admit they do have some beneficial qualities. If students live close but still have to drive, it will save $180 for a semester parking pass.

Even though some have a steep price, you can find hoverboards on Amazon for as cheap as $200. In addition with the Hendo Hoverboard, which actually hovers, the future is looking up for alternatives forms of transportation.

-Lia Tabert is a CSUN student.