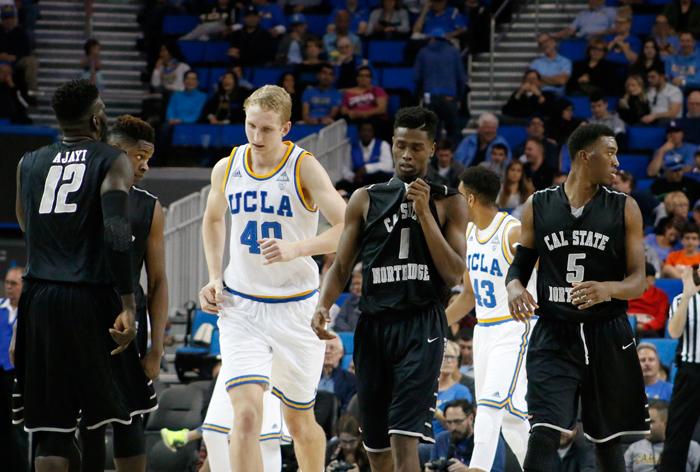 The CSUN Men's basketball team fell early in the game and were unable to recover losing to UCLA by a final score of 45-77 at Pauley Pavillion on Sunday Nov. 29, 2015. (Raul Martinez / The Sundial)

Following a heartbreaking overtime loss to the Loyola Marymount University Lions, the CSUN men’s basketball team was walloped by the UCLA Bruins, 77-45.

The Matadors, who were still without guards Jerron Wilbut and Aaron Parks, were dominated from the tip, falling behind 14-0 and going over six minutes before scoring.

“I feel like UCLA came out and dictated the tempo of the game,” said CSUN senior gaurd Landon Drew.

Outside of the size and speed advantage that the Bruins had, CSUN struggled finding ideal shots of any sort against UCLA’s zone defense, as evidenced by 1-11 shooting from the 3-point line in the game.

It wasn’t until freshman guard Micheal Warren grabbed an offensive rebound and converted inside the paint that the CSUN was able to get on the board.

Although Warren’s basket appeared to ease the Matadors on offense, they weren’t able to close the gap on the Bruins.

CSUN couldn’t prevent the Bruins from making outside baskets, as UCLA junior guard Isaac Hamilton drained consecutive 3-pointers to stretch the lead to 17 by the 12:10 mark of the first half.

Things may have been worse for CSUN had they not been more competitive in the interior, as they carried a 12-10 edge in points in the paint, and were only out-rebounded by two at half’s end.

Inside presence was a moot silver lining though, as the Matadors shot only 31 percent from the field and trailed 39-22 at halftime.

Despite being down by a substantial amount, the Matadors came out of the locker room sluggish, allowing UCLA to increase their lead to 22 points less than three minutes into the second half.

Without the luxury of a many scholarship reserves, the Matadors were forced to use fatigued regular rotation players, as the deficit grew to as many as 29 almost eight minutes into the half.

“There was no extra effort,” said Theus. “That comes from being young, and it comes from not having enough experience to know what to do in those situations. You gotta bear down.”

With several reserves in, the Bruins didn’t let up, eventually increasing the lead to 32 points with less than five minutes remaining.

Both teams would let their feet off the gas as the lead was sustained.

After losing all games in this three game road trip, CSUN returns home for a matchup against the Pepperdine Waves on Saturday, Dec. 5 at 7 p.m.