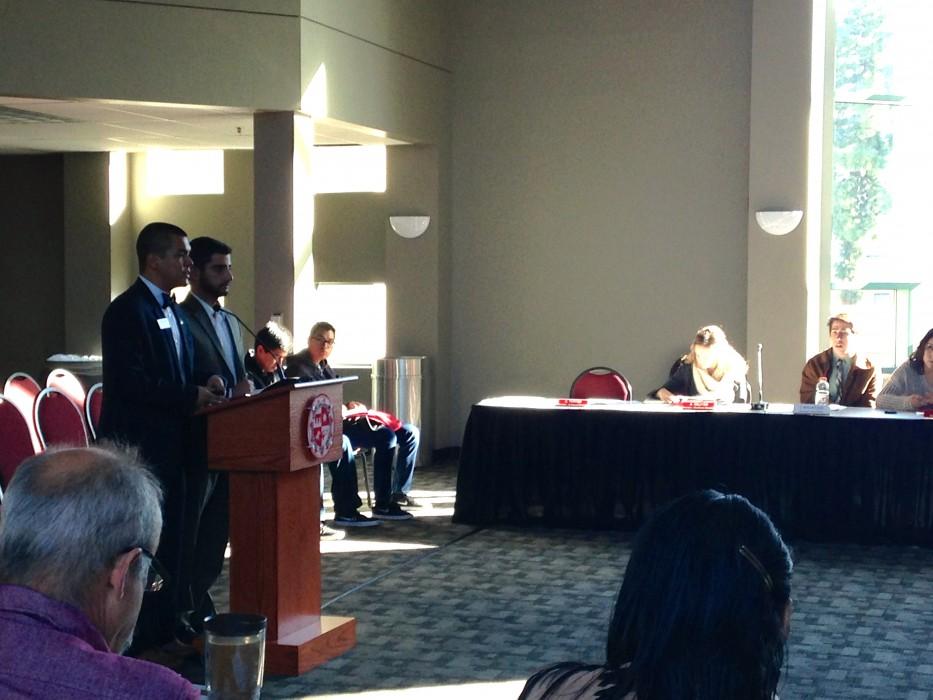 The updated draft report, submitted by the CSU Task Force on October 2015 after the draft’s completion in April, is titled “Ensuring Success for California’s Students.” The model details recommendations for each CSU campus and the CSU system as a whole to receive funding to enhance resources for student success that had previously been generated under Proposition 30.

Reyes and Alexanian discussed with A.S. senators the proposal’s impact on students and sought initial feedback from members.

“With the CSU, we’re supposed to be the ones that are providing education to our students at an affordable price,” Alexanian said. “What this proposal is essentially recommending is that the money – it’s going to keep increasing. It’s going to be deviating away from what the CSU stands for and how it differentiates us from private institutions as well as UCs.”

The task force works from the CSU chancellor’s office and consists of 16 members, including presidents from CSU East Bay and San Diego and a former student trustee CSUN graduate Talar Alexanian.

The first recommendation is for each campus to take inventory of buildings in need of infrastructure renovation. Also stating that each CSU could develop an additional fee aside from tuition or any other fee for students that could be used to fund deferred maintenance, along with reserves from the school.

At CSUN, Sierra Hall is a proposed area but is still usable. Other campuses have buildings that are in need of renovation, such as a Sacramento State University building that does not have women’s restrooms on the first floor.

The idea behind the task force is also to recommend each CSU campus to try and find funding from third-party groups so that money from students can be kept to only what is necessary, Alexanian said.

The task force also recommends that the chancellor’s office will set parameters for student financial aid, removing each campus’ ability to decide which students can receive certain grants, according to Reyes.

According to the model, the 2015-16 year was the fourth consecutive year without a tuition increase, and it proposed a tuition and fee increase of around 2 percent each year. Each campus could also increase its tuition for international or non-resident students.

Any changes should be phased in gradually, according to the proposal. The changes will give each CSU a more autonomous structure in regards to investment and allocation of resources.

“We don’t really exactly know what we students can do other than stand for what we believe in and go back to the mission of the CSU,” Reyes said in response to initial questions from senators.

The California State Student Association is currently drafting a resolution in response that A.S. will oversee, and A.S. will draft its own, most likely against the recommendations and hopefully it will be ready by next week, Reyes said.

The Board of Trustees will vote on the recommendations from the task force in January.

The chancellor’s office is taking comments from community members online, and A.S. will increase awareness through senators speaking with their constituents and inviting feedback.

Senator Iris Ramirez, who represents the College of Humanities and M.E.Ch.A. de CSUN, said that she was excited that A.S. discussed the financial model because her constituents have talked about high tuition.

“I am going to talk very seriously to students about creating movements on campus to bring attention to this issue,” she said.

· A.S. allocated $3,450 to the CSUN African Student Organization for its “A Night in Africa” Winter Gala and a reusable banner, with the stipulation to seek co-sponsorship from the USU

· The Blues Project will be having a fundraiser Dec. 17 at Skateland from 9 p.m. to midnight