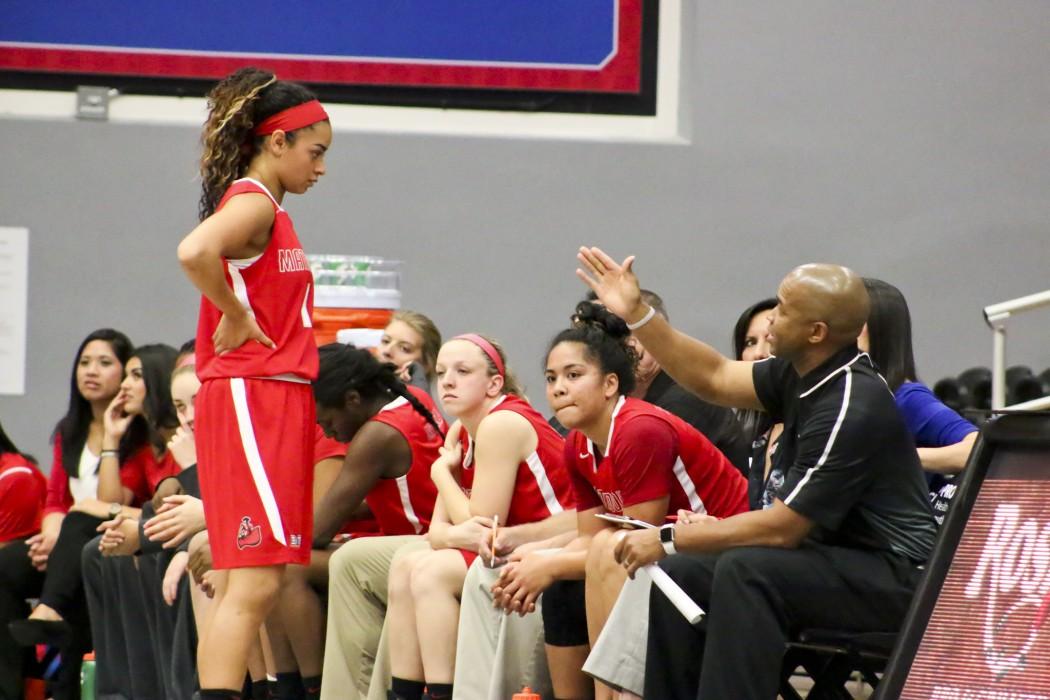 CSUN head coach Jason Flowers directs freshman guard Mimi Jackson in a Nov. 6 exhibition against The Master's College. Flowers hopes his direction can result in a win on Sunday against the Eagles. Photo credit: David Hawkins

Over the holiday break, the CSUN women’s basketball team was able to pick up their first win of the season in the Raddison Hotel Thanksgiving Basketball Classic. The team eventually split the two games they played, but competing against top-tier competition highlighted some newfound strengths and redundant weaknesses the team has.

Serafina Maulupe is the Perimeter Scoring Threat They Need

Coming into the season, it was believed that junior guard Emily Cole would fill the perimeter void that the graduated Ashlee Guay left. However, injuries and a slow start have not allowed that to happen, as Cole is only averaging 4.8 points per game, serving as more of a 3-point specialist. But over the weekend, redshirt sophomore Serafina Maulupe showed flashes of becoming that perimeter creator and off-dribble-threat that the Matadors desperately need. Against the Pennsylvania State University Nittany Lions, Maulupe exploded for 19 points 6-11 shooting from the field, including 2-3 from the 3-point line. Despite losing to the University of Georgia Bulldogs the following night, Maulupe still proved to be productive and efficient from the guard spot, scoring 14 points on 50 percent shooting. Although Maulupe is having success against defenses, the rest of the Matadors will need to shoot better, as they combined to shoot 40 percent from the field over during the tournament.

Until the Young Bigs Develop, CSUN Will Live and Die By the 3-pointer

Through six games, sophomore center Tessa Boagni is the leading scorer, the other frontcourt players are a bit inconsistent, as Jasmine Johnson, Channon Fluker, Caroline Gilling and Jordan Smith combine for 17.5 points per game. As a result, CSUN is reliant on guard play and outside shooting. Unfortunately, they shoot a porous 31.1 percent from the 3-point line, allowing opponents to crowd the paint without any repercussions. However, against the Nittany Lions, the Matadors were able to shoot 12-16 from the 3-point line, displaying how dangerous they can be when their shooters are in rhythm. Even though a 75 percent shooting percentage from outside is an unrealistic goal for every game, being able to stretch the floor with talented shooters would allow CSUN to compete with any team in the nation.

A lot of CSUN’s success over the past two seasons has been a result of heady veteran leadership at the point guard position, with Guay guiding the Matadors with a steady presence through difficult situations. But on a team that is missing sophomore Katelin King and is loaded with inexperienced guards, the team often finds itself playing a sloppy and cavalier brand of basketball. For the season, CSUN is averaging nearly twice as many turnovers as it does assists, giving the ball away 21 times per game, while only creating baskets 11 times per game. Even in the victory against Penn State, CSUN turned it over 21 times, while manufacturing only 15 assists. But that weakness was cloaked thanks in large part to the Matadors ability to make contested 3-pointers. The absence of a steadfast presence at point guard to create for others was highlighted against Georgia, when the Matadors gave up possession 19 times, leading to 26 points for the opponent. It’s possible that Maulupe can develop into a strong combo guard who can both distribute and score, or that King can be the consistent presence at point guard when she returns, but until Flowers can find a point guard he can trust, the Matadors will continue to give up too many points to keep games close.

One of the bright spots for the Matadors over the weekend was their ability to compete in the interior against large teams. In both games, CSUN only lost the rebounding battle two, with Johnson and Fluker leading the team in both games. The Matadors even had the edge in second chance points against the Nittany Lions, 14-11. As mentioned before, if the Matadors can be more effective beyond the 3-point line, Flowers will be able to utilize the size at his disposal to its full potential.