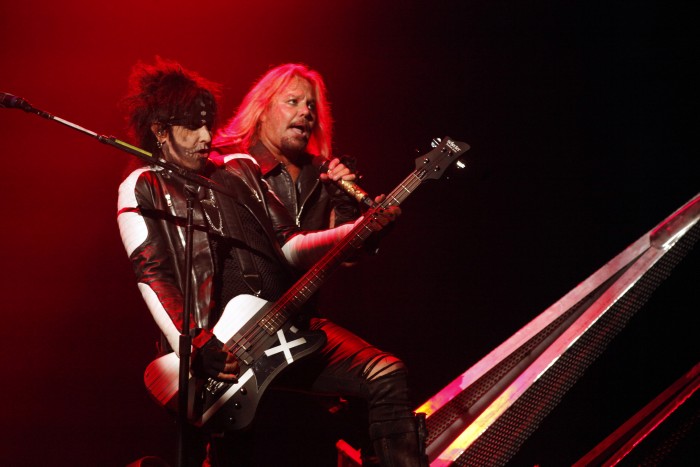 The genre of rock ‘n’ roll sparks up images of guitar strumming musicians, singing about relatable themes, using catchy tunes mixed with meaningful lyrics. In no other era is rock ‘n’ roll more prevalent than in the late 20th century when bands like the Rolling Stones, the Beatles, the Doors, Aerosmith, or Def Leppard were all over magazines.

This was the rock ‘n’ roll era. But since its creation in the 1950s, rock ‘n’ roll has gone through changes as the younger generation changes it’s meaning to fit their tastes. They keep the spirit alive, but in a different body.

CSUN assistant professor in music industry studies Carey Christensen said artists, in all formats of music, be it rock ‘n’ roll or jazz, hit a crossroads in their careers when it comes to the new thing and a decision must be made: change with the times or stay the same.

“At some point you got to monetize your art or it’s a hobby. At some point you have what you want to express, but you’re also at the same time trying to connect to an audience,” said Christensen, who was in multiple, local bands early in his career. “As the market matures, often the artists also mature, hopefully they can stay in sync. Sometimes they don’t, and we saw that with U2, and U2 at some point almost started to lose their audience.”

Christensen said rock music is a metamorphosing genre of music with the catalyst being the listeners.

“[What causes rock to change] is a shift in taste. As teen tastes change, as generations go on, the record industry usually tries and chase that. They’ve capitalized on what’s new, and preyed on a consumer with disposable income: teenagers,” said Christensen.

With all those factors — the industry, the fans, and the artists—furthering it transformation, rock matures, becomes an adult, and passes down all its teachings to the next generation and those teachings are sometimes apparent in contemporary songs, even in hip-hop and rap.

“There is a definite different [in music now and music then], but I wouldn’t say one is better or worse. It’s just the style on how the music is played has changed,” said CSUN student Ryshana Johnson. “It’s like telling the same story twice or three times. The message is there, but the words change or how you say the words change.”

The genre has had a history of change, but from its humble beginnings, it was subject to rejection.

“It was the first time that teenagers were identified as a demographic and had a style of music that was marketed particularly at them,” said Glen Garrett, professor of the history of rock ‘n’ roll.

Rock ‘n’ roll was born with the new generation of Americans in post-WWII, nicknamed the Baby Boomers. As these Americans grew into teenagers their tastes began to differ from the previous generation. They like the music of their parents so they sought alternatives in rhythm and blues, electric blues and gospel music.

But the newborn genre was not welcomed by the parents of the Baby Boomers.

“The light society denounced it, they hated it [and] musicians hated it. It was teenager rebellion. It was denounced as a communist conspiracy and immoral,” Garrett said. “It was only getting played on the radio and getting popular because disk jockeys were being paid to put this on the air.”

“You see the cycle happen in boy bands. These young preteen idols will grow up, have a following, will be big for a little while, but as their fan base ages, their fan base grows up and sort of moves on to into other more sophisticated forms of music,” Christensen said.

What makes a song a rock ‘n’ roll song is now being defined in comparison with contemporary pop music. While those who love “classic rock”, define a song based on standards from the ’70s or the ’80s.

“I hear a noticeable difference [between the music then and the music now]”, said Andrew Mergenthaler, fan of the band Journey. “The passion and technique have seemed to fade away as the need for perfect sounding uniform albums has become more desired.”