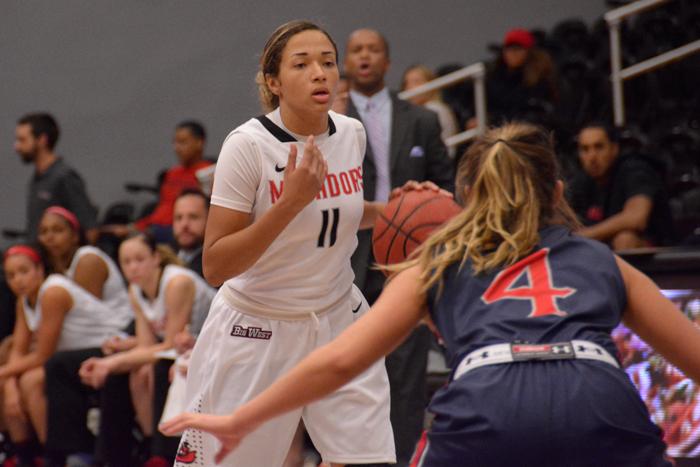 The CSUN women’s basketball team will match up against the University of Utah Utes in their next game.

Tipoff is scheduled for Thursday Dec. 3 at 6 p.m.

The Matadors come into the game with a record of 1-6 and currently on a two game losing streak.

Sophomore center Tessa Boagni is following up a solid freshman season with another strong campaign. She is leading the Matadors in scoring at 12 points per game while shooting 46.4 percent from the field. She is leading the team in rebounds along with freshman center Channon Fluker at 5.6 per game, and has a team high seven blocked shots.

Senior forward Jasmine Johnson is building on her junior year, in which she averaged career highs in points and rebounds, and having her best season to date. She is scoring a career high 7.0 points per game while pulling down a career high 4.6 rebounds per game. Her 48.5 percent shooting is good enough for second on the team behind only sophomore forward Jordan Smith’s 50 percent shooting.

Turnovers have been a key issue for the Matadors all season so far. They need to take better care of the ball as they are turning it over 20.9 times per game with opponents routinely capitalizing on their mistakes.

The Utes come into the match with a 3-2 record and are also currently on a two game losing streak.

They have been strong defensively, holding opponents to only 35 percent shooting from the field, while shooting 44.3 percent themselves. They are another high turnover team, coughing up the ball 19.2 times per game. They struggle from behind the arc however, only converting on 24.7 percent of their looks from the three point line.

Dominating the paint for the Utes is sophomore forward Emily Potter who is posting a double double on the season. She is scoring 16.4 points per game while pulling down 10.8 rebounds per game. She is shooting 58.2 percent from the field and has a team high 16 blocked shots.

Junior forward Paige Crozon helps balance the offensive from the perimeter, averaging 9.2 points per game on 51.7 percent shooting including 41.2 percent from the three point line.

After the conclusion of the road trip, the Matadors will return home on Monday, Dec. 7 against the San Diego State University Aztecs at 7 p.m.