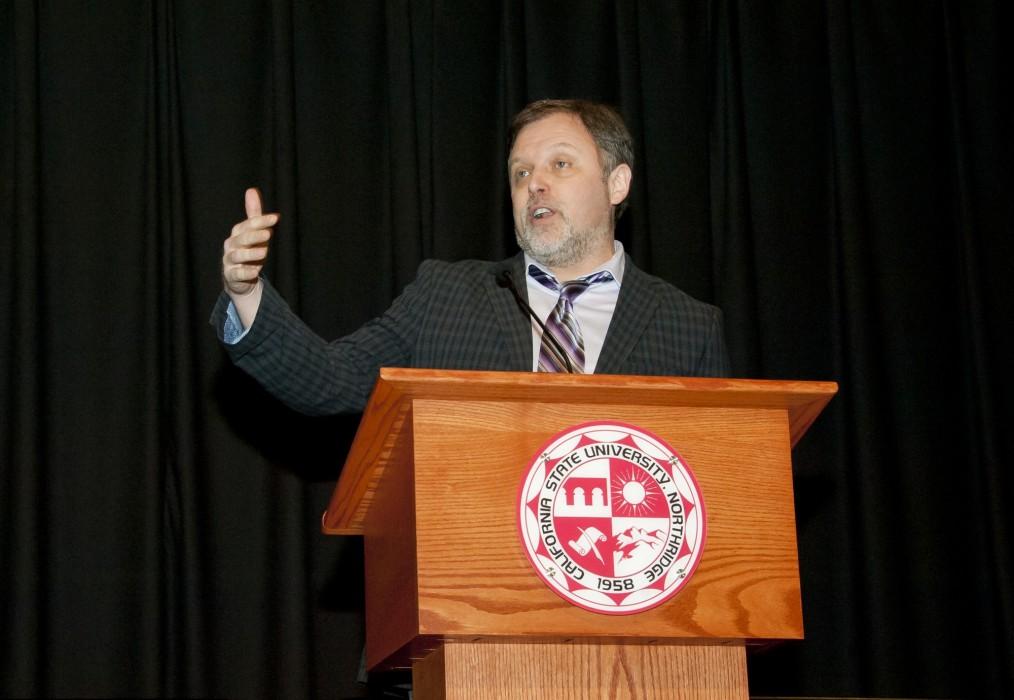 Keynote speaker Tim Wise gives a anti-racism speech to a full audience at The BUILD PODER conference in the Northridge Center on Wednesday, Dec. 2, 2015 in Northridge, Calif. (David J. Hawkins / The Sundial)

Anti-racist educator Tim Wise spoke on campus about how the ahistorical society of the U.S. propogates systemic racism and ignorance on Wednesday, Dec. 2.

Wise was the keynote speaker for the Building Infrastructure Leading to Diversity Promoting Opportunities for Diversity in Education and Research [Build PODER] Reflections on Privilege Conference.

Wise, author of six books including his acclaimed memoir “White Like Me,” engaged the packed Northridge Center for an hour, mixing humor into his presentation.

In reference to the nation’s attitude toward history, Wise called the U.S. “Snapchat nation,” saying that either people don’t learn from history — that they treat history like a Snap, looking at it for 10 seconds and then it’s gone — or are unwilling to be honest about history and its effects.

“We don’t like to live in the past,” Wise said. “Unless it makes you feel good.”

Wise said that white people have the privilege of being oblivious and that ignorance is built into the system.

He had started his presentation with a disclaimer for people not to take him too seriously and for him to not take himself too seriously.

“It’s important to acknowledge the irony of having a white guy tell you the importance of what colored people have been trying to say for years,” Wise said. “We’re in a place where white people have to filter the truth for you … We have to listen to truth from unlikely sources.”

While his presentation was entitled “Colorblind,” Wise spoke about discrimination of all forms.

Wise spoke about identity, giving the example that he is oblivious to calculus and he never took a calculus class; he said that nobody in the audience would listen to him if he tried to teach calculus because he would not know what he is talking about and he had just said he did not know calculus.

He made the same statement regarding discrimination of gender identity and disabilities, and then continued with a comparison to the red and blue pills in the “Matrix,” saying that it is like the dominant group is on a “blue-pill drip” of obliviousness while the minority group took the red pill of enlightenment.

“I’m not saying that if you don’t think about it, you’re a bad person. It’s not about good or bad,” Wise said.

The author concluded his presentation with the idea of humility — that being humble enough to acknowledge being misled and trying to make a change will help break the cycle of systemic ignorance and discrimination.