Security measures in place at CSUN in case of mass shooter 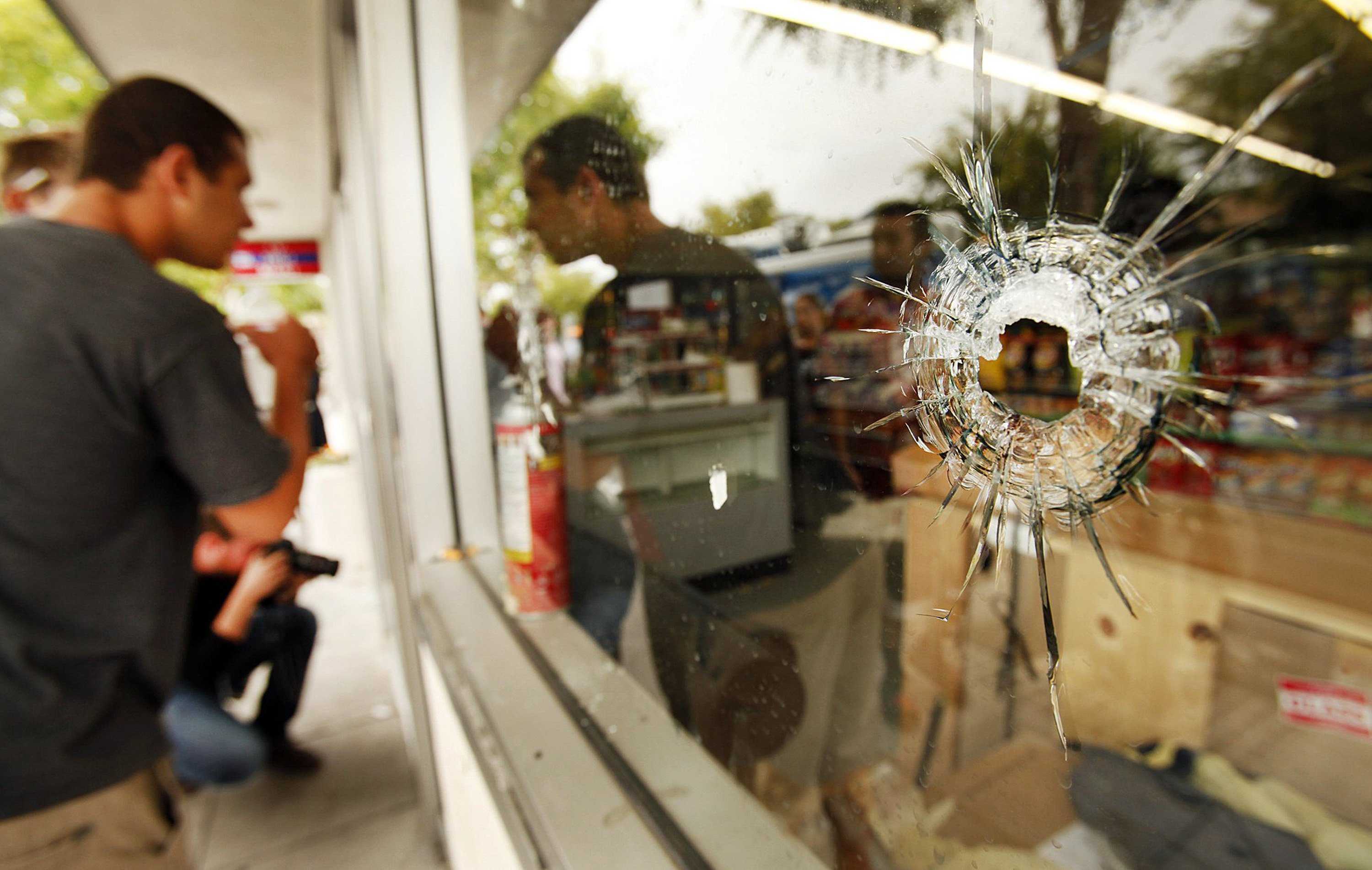 Students look through a window marked with bullet holes at the IV Deli in the Isla Vista neighborhood of Santa Barbara, Calif., Saturday, May 24, 2014. A shooting rampage on Friday left seven dead near the University of California, Santa Barbara. (Al Seib/Los Angeles Times/MCT)

Shooters killed at least 14 people and wounded an additional 17 at a center for people with developmental disabilities in San Bernardino, Calif., according to San Bernardino Police Chief Jarrod Burguan.

Police killed two suspects and a third was detained close to the scene, Burguan said.

CSUN student Eric Jones, majoring in cinema and TV arts with an emphasis in screenwriting, said he fears that a shooting like this could happen on campus.

“I absolutely feel like we are a prime target for a mass shooting — a whole lot of people in one place is a perfect place for someone to come and go crazy,” Jones said. “I’ve got a 9-year-old kid at home, so that stuff plays on my mind.”

Considering the prevalence of school shootings, it is natural that some CSUN students would feel concerned.

However, the university does have various measures in place in case of a shooting as well as to decrease the possibility of a shooting.

According to CSUN Chief of Police Anne Glavin, if an active-shooter situation were to take place on campus, the first step would be for campus police to confirm any reported incidents.

Police would then relay information and instructions to students through the university’s emergency broadcast system. Subsequent messages would be communicated every 20 minutes while the police pursue the shooter.

Glavin said she believes that the risk of a shooting on campus is low because of the considerable resources the university has put toward prevention.

Glavin is involved in various CSUN organizational bodies charged with lowering the chance of a shooting on campus.

She heads the Student Behavioral Intervention Team, which is made up of representatives of the university counselling services and student affairs. They meet every two weeks to assess problematic students and decide what level of danger they pose to the university.

The team only has about two students a year who show a real possibility of dangerousness, Glavin said.

“For less severe cases, kids that have shown some signs but nothing too extreme,” she said. “We deal with around 20 to 35 cases a year, sometimes it has been as high as 40.

“We are particularly conscious of people who are coming off, or have been off their [psychiatric] medications,” Glavin said. “These people have been shown to be the highest risk to the university.”

The behavioral intervention team works in close conjunction with the police department’s Threat Assessment Unit, which is headed by Lt. Mark Benavidez. The unit conducts investigations into any reports of violence from CSUN students.

According to Glavin, almost all universities in the nation are equipped with some form of threat assessment unit.

Additionally, the CSUN Police Department have created a “Dealing with Workplace Violence and Fear or Threats of Violence” workshop on campus. The staff are told how to deal with problematic students on campus and are given strategies for responding to an active shooter.

“I always think about the chance that someone could just walk on in to campus and could kill so many people,” Washington said. “We need more security on campus to deal with these situations if they happen.”

According to shootingtracker.com, the San Bernardino massacre marks the 353rd mass shooting of 2015 in America.