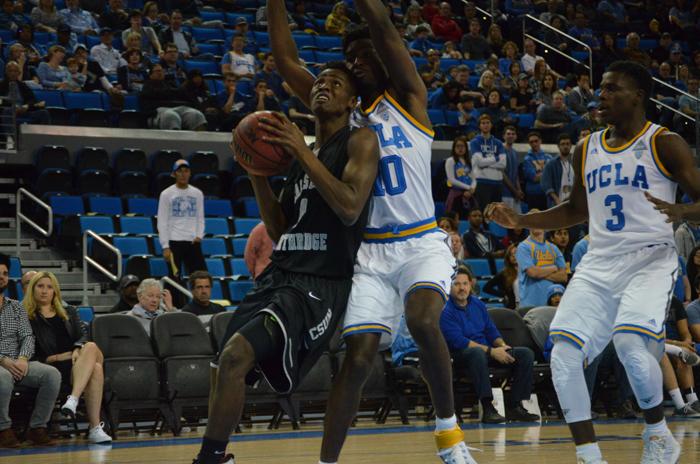 CSUN sophomore guard Micheal Warren drives down the lane against UCLA at the Pauley Pavilion on Nov. 29. Warren led CSUN with nine points as the Matadors lost 77-45 to the Bruins. (Vincent Nguyen / The Sundial)

Coming off three-straight road losses and now at 2-5, the Matadors men’s basketball team returns to the Matadome seeking to snap their losing streak against the 3-4 Pepperdine Waves.

Both teams have been inconsistent so far in the young season as they’ve been unable to string along consecutive wins.

The start of the schedule hasn’t made it easy for the Matadors to find their rhythm.

For just the second time this season the Matadors will play at home. Their first game resulted in a win.

Being at home will be an advantage for the Matadors as their opponents are winless on the road.

As their records indicate, both teams are evenly matched.

However, the Waves are averaging 69.3 points per game to the Matadors’ 67.6 mark.

They also hold a slight advantage in rebound and shooting percentage.

The Waves average 37.9 rebounds and are shooting 43 percent from the field, while the Matadors average almost the same with 37 rebounds and .425 percent.

The Matadors will have to defend the perimeter as the Waves shoot .314 percent behind the arc, while the team has a percent of .283.

In a tightly contested match-up, the Matadors can not allow the Waves to a strong start as they have shown to let up in the second half.

The Waves have outscored their opponents in the first half 252-219 but have been outscored in the second half 233-241.

The team will have opportunities to take advantage of the Waves second half performance as they have shown to finish strong.

The Matadors have scored more in the second half than the first, 248-218.

A trio of scorers will lead the late run.

Led by freshman guard Jason Richardson’s 14.3 points per game, the team will have different options for scoring.

The team will have to continue to move the ball around and find the open person.

The Matadors look to snap their losing streak and get their third win of the season on Saturday, Dec. 5, when they take on the Pepperdine Waves at 7 p.m. at the Matadome.