Vocal Artillery: Your words, your weapon 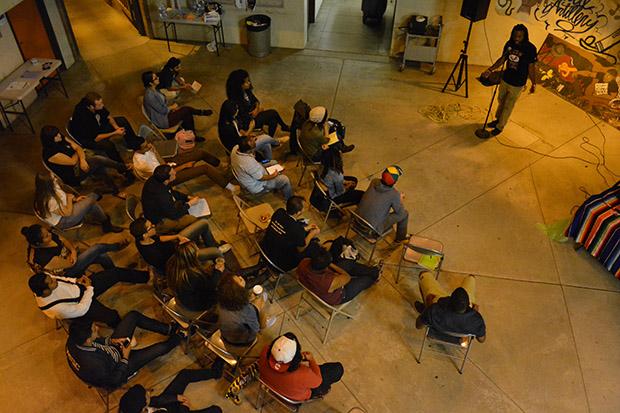 Jamar Morris, 22, an English major was the MC at the Vocal Artillery open mic event in Santa Susana Hall on Thursday. "We are getting different organizations to come together," Morris said, "An oppression anywhere is a threat to everyone." Students spoke about many issues like corrupt government, high education fees and the current dilemna with food stamp cuts. Photo credit: John Saringo-Rodriguez / Photo Editor

Vocal Artillery, an independent community group embrace the voice of CSUN’s marginalized communities by creating a safe space for expression.

The group formed by CSUN students and alumni was created with the basis of providing a space “to serve politically oppressed communities by giving them a voice and a place to express themselves,” says Morris, one of the founders of Vocal Artillery.

The group was created about three years ago when one the founders, Jamar Morris, spoke about his interest in the event to his friends –Janet Valenzuela also known as DJ RepStyles, Diego Paniagua, Edgar Ramos, and Yereni Ruiz– and not too long after the first Vocal Artillery debuted at the Chicana/o house on Plummer St.

With the success of the first VA, the group decided to keep returning every second Thursday of the month at 8 p.m. during the semester seeing attendance grow and talent diversify. Live music is always playing, live art is constantly being created and people showcase their individual skills.

The group moved the event’s location into the Santa Susana Building providing an easier to find and more accommodating location. Its new location allows for a larger audience and amplified sounds. The buildings round architecture allows for great acoustics, enough seating space, plenty of ventilation and the overall sense of community. Vocal Artillery has occupied the space in order to provide CSUN students the place and opportunity to speak about taboo issues like police brutality, government corruption, LGBTQ issues, and many others.

“The way it is set up allows people to own the stage,” said Morris, “It’s a microcosm of CSUN’s ethnic community.”

During the group’s existence, many students have taken opportunity of the space and return with the expectation of seeing great amateur and professional performances. Vocal Artillery has also given some students the courage to embrace and pursue a poetic talent. The group also embraces and educates their audience about hip-hop culture and its place in the people’s struggle.

According to Wesley Hernandez, a CSUN alumni and returning VA poet, Vocal Artillery “has allowed [him] to be [himself], you can do any poem about anything without worrying what the audience will say.” One of the poets’ favorite things of the night include the deliverance and entertainment provided by the night’s host and VA co-founder Jamar Morris. “The emcee really does it for me,” said Hernandez “he’s very welcoming, funny, he knows how to set the tone. Right from the beginning, he warms up the audience with a poem and introduces what VA is. He talks a little about hip hop culture and voices that are marginalized and oppressed. He allows anyone to come in and express themselves,” said Hernandez.

As for new comers, Vocal Artillery hopes to create a welcoming environment, fun enough to enjoy and “real” enough to return. “I had a great time, there were some performers I could really relate to,” said Cassandra Orozco, 21 year-old deaf studies transfer student, “I appreciate the DJ being a woman,” she continued.

Vocal Artillery not only promotes self-expression and art but whole heartedly embraces the meaning of it. The group’s struggle to provide a space free of judgement and unlimited artistic expression and development has allowed them to transcend in their journey.

The last open mic session of the semester is Dec. 10 in the middle of Santa Susana.