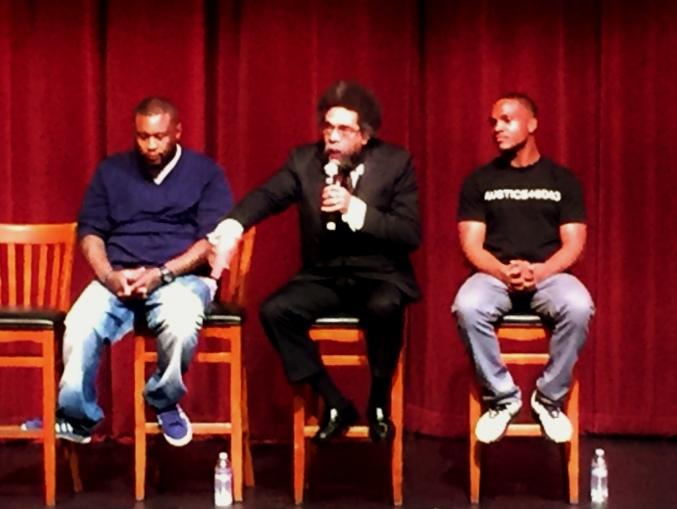 Brandon Duncan a.k.a Tiny Doo, Dr. Cornel West, and Aaron Harvey opened up the floor for questions regarding their experiences as well as questions about organizing and activism. Photo credit: Priscilla Diaz

In order to combat policies affecting the Black and Latino population, renowned activist and academic Cornel West visited Lincoln High school on Dec. 4 in Southeast San Diego with hundreds of community members and Southern California scholars to engage in discussion about Penal Code 182.5.

Earlier this year, San Diego made national news when local rap artist, Brandon Duncan, 33, also known as Tiny Doo, was arrested by San Diego Police in relation to crimes carried out by gangs around the Lincoln Heights area that he had no relation to but mentioned in his music.

Along with Duncan, several others were arrested in relation to the same operation. While serving time for crimes he did not commit, Duncan became acquainted with Aaron Harvey who had been arrested and accused of the same crimes and together worked towards solving their case. Harvey later established connections with Dr. West and has worked towards bringing awareness to such policies.

Penal Code 182.5 passed in 2000 as part of proposition 21 which hardens penalties for youth offenders. The law allows for active gang members to be charged for crimes committed by other members even if they were not involved in the crime. But according to Harvey, you can become a documented gang member simply by association and never know it.

Policies like these become dangerous when they target the wrong people. According to Duncan, the effects of such policies can lead to the breaking of families.

“When they took me to jail, my sons were left without a father,” said Duncan. “I’m a single parent and when I’m home my sons are doing [well] in school, they’re scholars. But you come and take me out of the home and now they’re getting F’s in school and stop going to school.”

Duncan also said that one of his sons even dropped out of school completely when Duncan was serving time.

“If you take a father out the home it messes everything up especially when you don’t have a reason to. I’m fully for ‘you do the crime you do the time,’ I’m not for coming into neighborhoods taking people to jail based off assumptions,” said Duncan.

Dr. West’s presence in San Diego was not only necessary to ignite discussion but is also a precursor to the progression that’s to come for San Diego.

According to Brisa Johnson, the civic engagement manager for Alliance San Diego a non-profit organization that lobbies for underrepresented communities in San Diego, Dr. Cornel’s visit is “extremely powerful for one reason – in San Diego, the black population is six percent, with only 168,000 of us.”

“For an African American leader of his stance to come to San Diego where the black population is small shows that we are gaining enough momentum and making enough noise. That we are starting to get the attention and need to start creating the change that we have been wanting to do and have needed for years. So him coming here is a huge impact on not only our progress but to inspire those who are still asleep,” said Johnson.