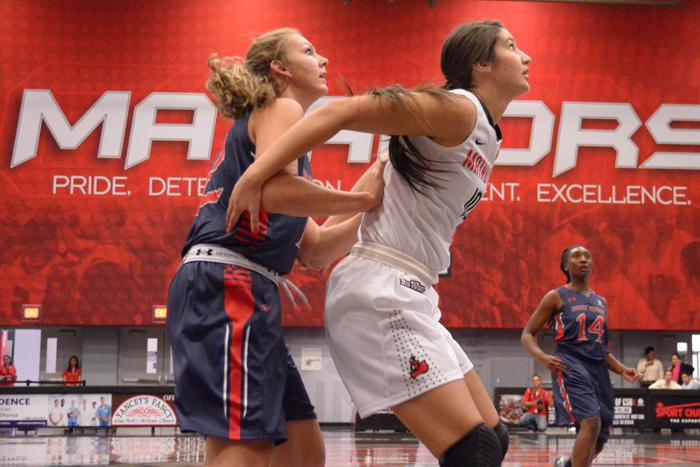 Tessa Boagni boxes out for one of her six rebounds in the the loss to the Saint Mary's Gaels by a score of 59-93 at the Matadome in Northridge Calif., on Friday, Nov. 13, 2015. (Raul Martinez/ The Sundial)

Leading by two points and with 18 seconds remaining in the game, all the Matadors had to do was get one final defensive stop.

Instead, they let San Diego State Aztecs guard Lexy Thorderson get free and she drained a go ahead three point shot that ultimately sunk the Matadors, 67-65, on Monday night.

The loss is the fourth straight for the CSUN women’s basketball team and they fall to 1-8 overall.

The Matadors still had the opportunity to win the game, trailing by one and in possession of the ball with 11 seconds left, but sophomore center Tessa Boagni committed a costly turnover and the Matadors were forced to foul.

Junior guard Ariell Bostick was able to hit one out of two free throws to ice the game.

The Matadors were led by freshman guard Claudia Ramos who had 14 points on 55.6 percent shooting and five assists, but she missed a crucial free throw with 18 seconds left that would have given them a three-point lead and Thorderson’s three pointer would have only tied the game.

Boagni and sophomore guard Serafina Maulupe chipped in with 11 points each.

The Aztecs were led by sophomore guard McKynzie Fort who had 18 points albeit on 37.5 percent shooting. Sophomore guard Cheyenne Greenhouse added 11 points.

Being careless with the ball has been a problem for the Matadors all season long but they were able to limit there turnovers committing only 11 while forcing 19. They were also able to hold their own inside, scoring the same amount of points in the paint, 32, as the Aztecs.

Despite outrebounding the Aztecs, 44-35, the Matadors could not take advantage as they only managed to put up 12 second chance points compared to the Aztecs 11.

The Matadors will head out on a four game road trip for the rest of December.

The next game is against the University of Portland Pilots on Friday, Dec. 18. and tipoff is scheduled for 2 p.m.