Mass shootings has many calling for more gun control 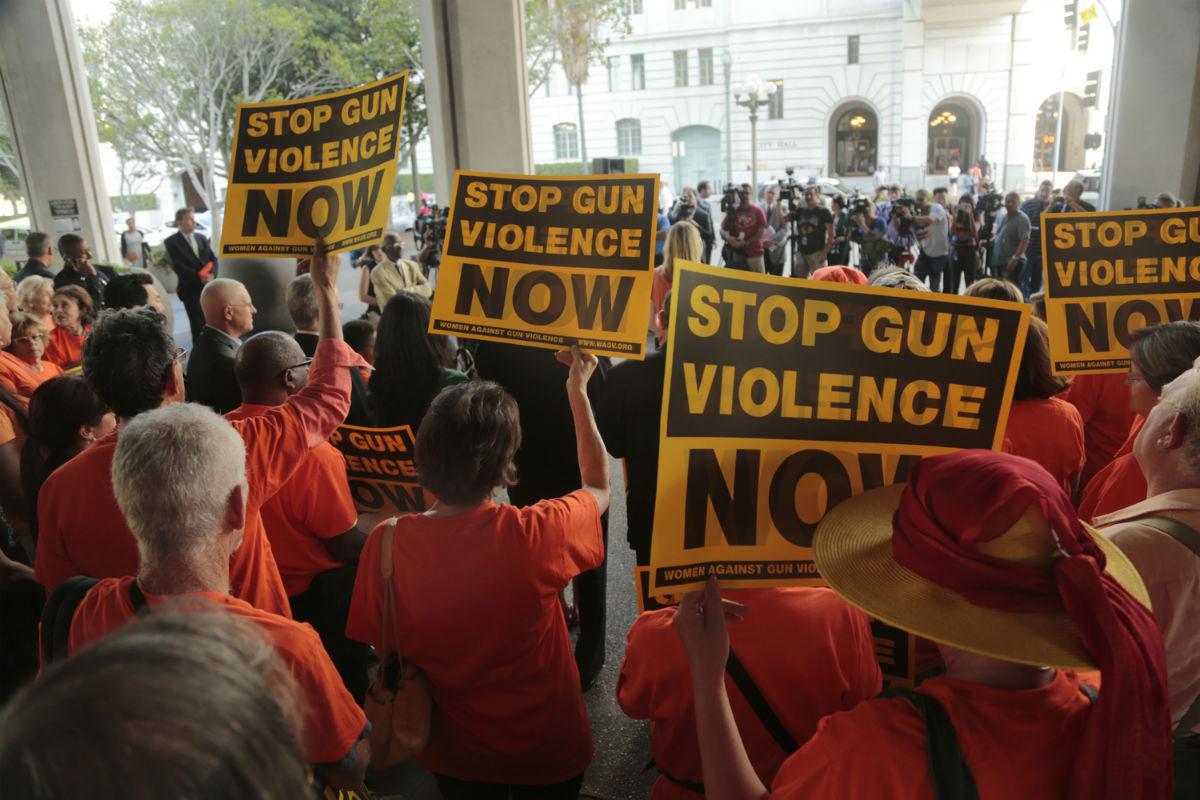 Activists for more gun control gather in front of Los Angeles City Hall for a rally prior to a vote by the Los Angeles City Council vote that would ban the possession of large capacity firearm magazines, on Tuesday, July 28, 2015. (Mark Boster/Los Angeles Times/TNS)

The Second Amendment has polarized America for years, but as mass shootings plague the nation at a rate of more than one a day, the subject has been thrown full-force back into the public discourse.

CSUN is not immune to these discussions. Students and professors across the campus hold a range of strong convictions on gun control.

The abundance of these horrific crimes makes CSUN professor and political commentator Ana Kasparian, feel uneasy coming on to campus every week.

“I don’t feel safe anywhere right now,” said Kasparian. “We’re swimming in a sea of guns, there’s a mass shooting almost every day. Unfortunately we are unlikely to come up with any real solutions because of how powerful the influence of the gun manufacturer is.”

CSUN alumni Jon Soto, also feels that campus is unsafe, but thinks that allowing students to have a concealed carry weapon will make it safer.

“As long as campuses are gun free zones, CSU students are in jeopardy,” said Soto. “It takes an armed response to respond to an armed criminal.”

In a speech following the Oregon Community College shooting where ten people died, Obama discussed his inability to affect change in “a congress that explicitly blocks us from even collecting data on how we could potentially reduce gun deaths.”

Kasparian believes that gun control is the only way to prevent tragedies like the San Bernardino massacre.

She mentioned the case of Dylan Roof, who is accused of murdering nine people at a church in Charleston, South Carolina. Roof was able to pass a background check, despite previously admitting to drug possession as a result of a federal loophole.

Obama cited a different loophole in his primetime address to the nation Sunday, responding to the San Bernardino massacre.

“What could possibly be the argument for allowing a terrorist suspect to buy a semiautomatic weapon?” asked the President.

CSUN sophomore and political science major Michael Carden, says that loopholes like these can only be avoided by enacting strong gun restrictions at a federal level.

“The only way gun control can ever work is if it happens in a unified way, every state needs to be on board with it,” said Carden. “California is one of the tougher places to get a gun, but if you really wanted to get one you can head over to Arizona and pick up an assault rifle at a gun show.”

However, not everybody agrees that federal gun control is the most effective method for reducing gun fatalities.

“It can’t and shouldn’t be done at a federal level, nothing works well from up there,” said junior Engineering major Nolyn Preston. “States should be the only ones in charge of running their policy. Here in California we have different needs and problems than they do in, say, New Hampshire.”

California has some of the strictest gun control laws in America. People trying to buy a handgun must pass a written test, and a 10 day waiting period is required for the purchase of any firearm. There is also a total ban on assault style weapons, which has just been rendered constitutional by the SCOTUS.

Assault rifles are generally the weapon of choice in mass shootings, like the AR-15, the rifle model used in both the San Bernardino and the recent Colorado springs shooting which can shoot between 700 and 950 rounds per minute. Of the weapons used in mass shootings over the last three decades, 82 percent were purchased legally, according to data collected by MotherJones.

“Gun control is just a logical move to make,” said freshman political science major David Carter. “There is no real justification for reducing background checks, why would we want mentally ill people running around with deadly weapons?”

Despite roadblocks from both sides of the party lines in getting gun regulations through congress, the issue for regular Americans is not as divisive as it seems. In fact, Pew Research statistics from 2013 show that 85 percent of Americans endorse tighter background checks on gun buyers, including 79 percent of republicans.

CSUN Chief of Police Anne Glavin, thinks background checks are the best way to prevent mentally unstable people from getting a hold of weapons.

“There is an inherent danger in having people who are not in a stable mental state being in control of a deadly weapon,” said Glavin. “The number of cases of mass shootings on college campuses throughout the United States is increasing. It is up to us to ensure that this has the lowest possible chance of happening.”

You can read how CSUN is taking active steps to avoid this from happening here.