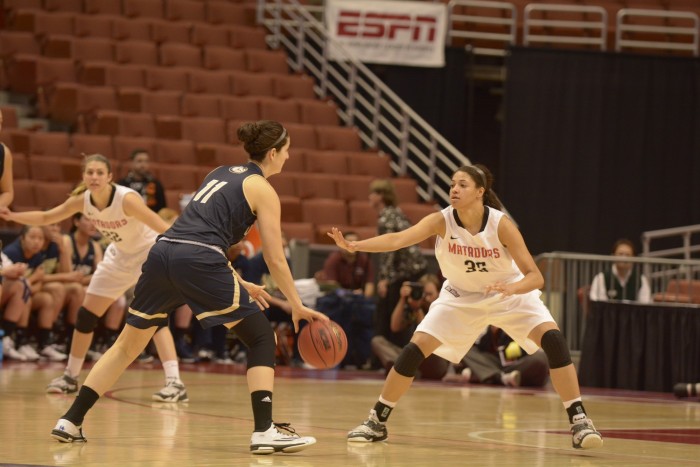 Despite a late rally, the Matadors could not get their fourth straight winning, running out of gas on the road against Long Beach State. (File Photo/Raul Martinez/The Sundial)

The CSUN women’s basketball team continued their road trip on Sunday afternoon with an 83-77 loss to the Portland State University Vikings.

The Matadors were coming off of only their second win of the season on Friday night against the University of Portland Pilots. The loss drops the Matadors to 2-9 on the season.

The Matadors actually led 60-55 heading into the fourth and final quarter, but were unable to sustain their momentum and ended up squandering the lead behind a hot shooting quarter from the Pilots.

The Pilots were able to hit four three point shots in the fourth quarter and shot 75 percent from behind the arc overall in the second half. Pilot freshman guard Kian McNair’s three pointer with 6:42 left in the game gave the Pilots the lead for good.

Sophomore guard Tessa Boagni led the way for the Matadors in defeat, with a career high 28 points. She shot 55 percent from the field and added eight rebounds and two blocked shots. Sophomore guard Serafina Maulupe chipped in with 18 points on 58.3 percent shooting to go along with five rebounds, three assists, and three steals.

Overall, the Matadors were able to limit a few of their weaknesses this season, points in the paint and turnovers. They limited themselves to 15 turnovers while forcing 24, converting them in 21 points. They also outscored the Pilots, 28-24, in the paint.

The Matadors will continue their road trip on Monday Dec. 28 against the Arizona State University Sun Devils. Tipoff is scheduled for 2 p.m.