CSUN lets one slip away late, loses to Idaho State, 84-79 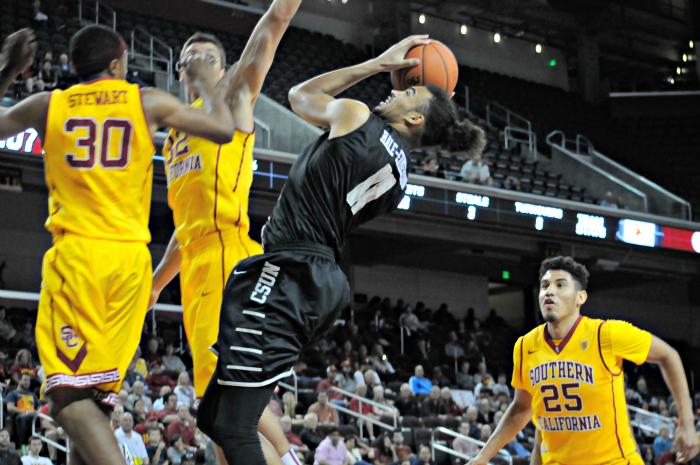 CSUN senior Tre Hale-Edmerson (center) goes for the lay-up as the Matadors faced the USC Trojans at the Galen Center on Nov. 23. CSUN lost 96-61 in its fifth non-conference game.

Despite having five players score in double-figures, the Matadors were not able to earn the victory against the Idaho State University Bengals, 84-79, which marks their second straight loss.

The Matadors shot a game-best 47.5 percent from the field which bested the Bengals 46.6 percent field-goal percentage.

The Matadors led the Bengals 37-36 at the half following a three-pointer by Tavrion Dawson with one second to go in the half.

In the second half, CSUN would get within one following a lay-up by junior guard Kendall Smith with 22 seconds remaining in the game and score being 79-80 in favor of the home team.

On the ensuing possession Idaho State leading scorer Ali Faruq-Bey would knock down both his free-throws and on the following possession Tre Hale-Edmerson would turn the ball over thereby putting the game out of reach for good.

The bright-side of the two road losses is the emergence of sophomore guard Jerron Wilbut who is averaging 15 points per game off the bench in two contests this season.

The Matadors return home to the the Matadome where they are 3-2 on the season. Their opponent are the Morgan State Bears who will be the Matadors’ final non-conference tune-up before beginning Big West Conference play on Wednesday, January 6 vs. the Long Beach State 49ers.