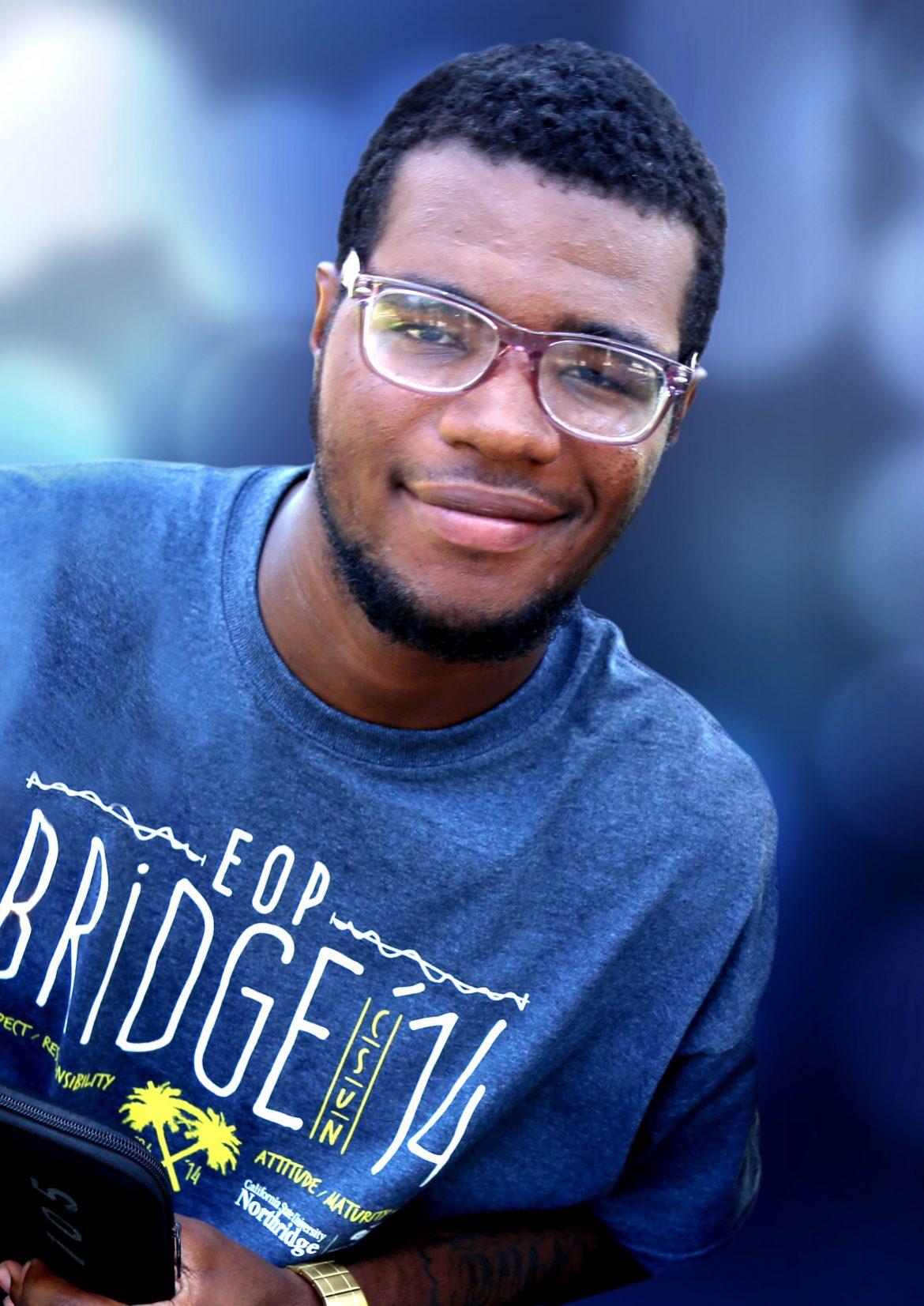 Just before 9 a.m. on March 9, 2018, a nurse approached Cell B-16 at Twin Towers Correctional Facility. Quinten Thomas, the 22-year-old Black man who was in that cell, was a CSUN student who had been in jail for six days after LAPD officers apprehended him at a CVS in Northridge on an outstanding warrant for failing to appear in court.

The nurse was Nneka Onyiah, who had worked at Twin Towers for more than 20 years. She asked Thomas to take his Keppra, a medication he took for idiopathic seizures.

Thomas rose from his bed and came to the cell door. He refused to take his medication. He said he had a headache, but he refused Tylenol. He said he was in pain.

Onyiah stayed at the cell, pleading with Thomas for him to take his medication, but he wouldn’t budge. With over 100 other inmates who also needed their medications to attend to, Onyiah moved on.

Thomas had experienced multiple seizures while he was at Twin Towers. On March 8, he was sent to the Twin Towers medical clinic for a seizure. Another nurse, David Ghalayan, assessed him for half an hour and sent him back to his cell.

Onyiah didn’t know about Thomas’ other seizures when she approached his cell that morning and neither did the deputies who had peered into his cell.

Deputy Glendale Watkins said in a deposition that he saw Thomas lying face down on the floor in his cell early that morning. Watkins thought he was sleeping. Watkins recalled an incident where an inmate had feigned sleep to attack officers. He believed Thomas was doing the same.

“The way he was positioned, I figured as he’s just waiting to strike,” Watkins said.

Deputy Jose Oseguera called Watkins for backup when he could not get a response from Thomas during lunchtime at around 11 a.m. They then called Custody Officer Charlotte Chavarria, who had seen Thomas on pill call the day before.

Fearful of Thomas, the deputies hesitated to approach him as he was a K-10 inmate — a designation for inmates who have a history of “hostile and dangerous” behavior. The reason for Thomas’ K-10 status is still scrutinized by the lawyer representing his family, but its stigma marred his last days.

“Knowing that he’s a K-10 inmate, these inmates are hostile, unpredictable, and they’re ready to get us at all times. So you gotta stay on your toes,” Watkins said.

The deputies tried to get a response from Thomas. They couldn’t. He was still lying on the cell floor. Oseguera threw an orange juice box at Thomas’ head. Thomas still laid there with his cheek touching the concrete floor, his dreadlocks in his face.

“We stand there, we still try to elicit a response, thinking this dude’s going to pop up and get us,” Watkins said.

The deputies cuffed Thomas’ hands and feet and pulled him out of his cell. A nurse arrived at 11:22 a.m. Los Angeles Fire Department paramedics arrived minutes after. The medics found Thomas in full rigor mortis, meaning he had been dead for hours.

“And you couldn’t give it to him because why?” asked RoseAnn Frazee, the lawyer representing Thomas’ family.

“Do I say it?” Onyiah replied.

“Yeah. He was deceased,” Onyiah replied.

Thomas was declared dead at 11:37 a.m. Three years after his death, the circumstances surrounding his death are still being debated. The Los Angeles Sheriff’s Department listed Thomas’ cause of death as a result of an “idiopathic seizure” in the autopsy performed by the L.A. County coroner’s office.

Protective orders placed on case documents by LASD have hidden much of the evidence associated with the case.

During the month he died, Twin Towers was at 141% capacity. The jail was designed to hold 13,000 inmates, but it held over 17,000 inmates during the week that Thomas died. Inmates with misdemeanor charges made up for over half of the facility’s population. 30% of those inmates were Black men.

Chavarria said that Thomas appeared groggy on the morning of his death when he refused his medication and told Onyiah he had a headache.

“If you had known that he had signed into the jail and advised the jail of epileptic seizures, would you have acted differently?” Frazee asked Chavarria during her deposition.

Multiple deputies saw Thomas earlier that morning during daily Title 15 checks — checks that affirm that an inmate is alive and in their cell — at least three times before they realized he was unconscious.

Vickie Jensen, the head of the criminal justice department at CSUN, said that the treatment used by the deputies in Thomas’ case is a trend, not a one-off incident.

“The whole correctional facility, from an administrative point of view, doesn’t have all the ingredients … in terms of what I’d call proper training,” Jensen said. “Human relations, active listening, understanding the culture.”

Working in corrections is the first step out of the training academy for new recruits — a rung on a ladder rather than a final stop. However, the LASD careers portal does not list corrections anywhere in the description for its academy training.

“Just looking at the way that LAPD and LASD do training, the correctional piece is very small,” Jensen said. “Most of the training is post-certified law enforcement training. The corrections is an afterthought, or a necessary evil.”

The lawsuit filed against L.A. County alleges that the nurses and correctional officers who took care of Thomas during his time at Twin Towers engaged in “deliberate medical negligence.”

Medical negligence has been a well-documented cause of illness and death for Black Americans for decades. The specifics vary, but the circumstances bear similarities to the last hours of Thomas’ life — communication barriers, racist stereotypes, and distrust dating back to the Tuskegee Experiment.

Marc Glidden, a political science assistant professor at CSUN who specializes in corrections, said that at a facility like Twin Towers — and at many other jails across America — any inmate who needs more than basic care may struggle to get it.

Incarceration is a behemoth institution with over 2 million people in American prisons as of 2019. Twin Towers looms over them all as one of the largest jails in America. In 2019, the average length of a stay in an L.A. County jail was 60 days.

“Historically, people weren’t supposed to spend more than a year there,” Jensen said. “It was set up to be very temporary, for better or for worse. If you’ve got constantly changing populations, and you’ve got changing deputies who are in the jails, at best you’re in a holding pattern.”

In 1974, an inmate in Texas was injured when a 600-pound bale of cotton fell on him during a work assignment. The inmate, J.W. Gamble, went through a revolving door of doctors and diagnoses.
The case, Estelle v. Gamble, went to the Supreme Court, which ruled in an 8-to-1 decision that the prison failed to properly treat Gamble. The case solidified that even when someone is in a jail or a prison, they are entitled to humane medical treatment.

“I don’t want to say medical needs aren’t a priority, but they aren’t the biggest priority,” Glidden said. “They’re worried about so many other things upon entry into a jail system.”

In her deposition, Onyiah repeatedly stated that she had 100 other inmates to see during her pill call. Thomas never signed a medical refusal form because Onyiah was still unfinished with her pill call for the morning.

“At what point do things start slipping?” Jensen said. “People slip through the cracks, whether people want them to or not.”

Jensen described a medical environment well behind the technological advances seen in hospitals like UCLA and Kaiser Permanente, where digitized records allow nurses and doctors to be more aware of the patients they are caring for.

“Ideally, they should have everything on a prisoner easily accessible in a digitized chart, including misconduct and everything else,” Jensen said. “I am quite confident that none of that is working particularly well, if at all, in the jail system.”

Jensen was unsure how the case would end. It faces a long road and a complicated legal battle.

“I think Quinten’s supporters are going to be disappointed,” she said. She paused. “I hope I’m wrong. Regardless of Quinten’s decisions, he didn’t deserve to die in jail.”

Sahara White, Thomas’ partner, and the legal team representing his daughter Ashanti face an uphill battle in getting the jury trial they want, but they feel a responsibility to hold the Sheriff’s department accountable for what happened to him.

The L.A. County Sheriff’s Department did not respond to multiple requests for comment.