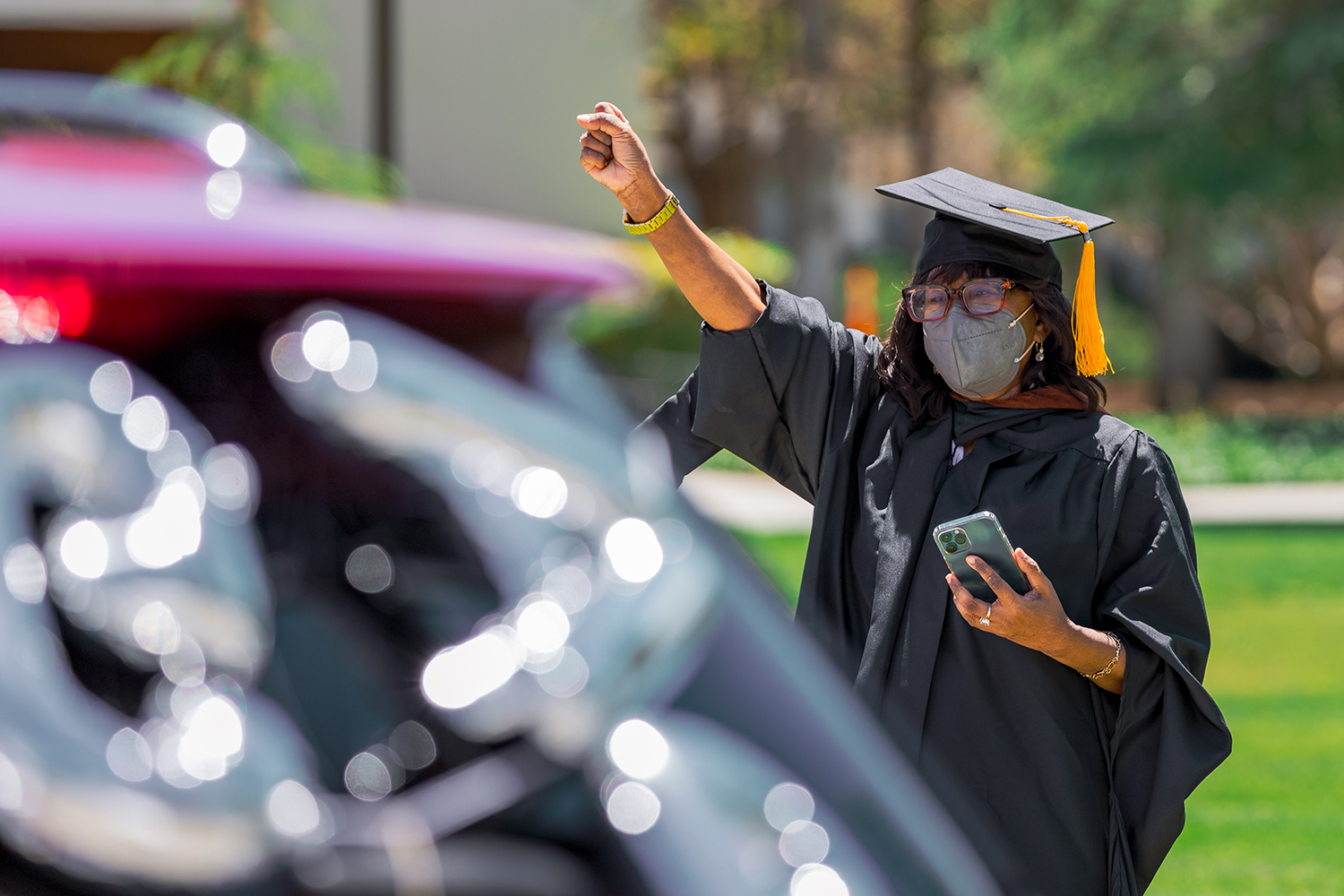 Dianah E. Wynter, a cinema and television professor, congratulates the 2020 and 2021 graduates as they drive past her during the CSUN Grad Parade at CSUN in Northridge, Calif., on Tuesday, May 25, 2021. (Chris Torres)

Dianah E. Wynter, a cinema and television professor, congratulates the 2020 and 2021 graduates as they drive past her during the CSUN Grad Parade at CSUN in Northridge, Calif., on Tuesday, May 25, 2021.

In a ceremony that spanned four days, thousands of students from the 2020-21 and 2019-20 graduating classes celebrated their achievements via a drive-through parade on campus last week.

Students, faculty, and staff endured temperatures of up to 94 degrees Fahrenheit in black gowns to participate in the celebration and the sweltering heat seemingly deterred no one.

“Everything we do here, we do for our students,” said Interim Dean of the College of Humanities Jackie Stallcup. “I don’t care how hot it is, this is fabulous!”

The parade route began on the east side of campus on Vincennes Street, where students and their guests were met with a stage and a DJ that blasted beats as they waited to proceed along the route.

The route then continued past Jacaranda Hall before taking a left turn toward the CSUN University Library with staff and faculty cheering along the way.

Consistent honking coming from the cars participating could be heard throughout campus and the sounds of celebration from graduating seniors of CSUN reverberated off of campus buildings for the first time in over a year.

The cars were then able to drive onto Matador Walk in front of the University Library and its adjacent lawn — where traditional in-person commencements were held for decades until last year — before being ushered off campus via University Drive.

Professor D.E. Wynter from the cinema and television arts department expressed how important this parade was, saying that students that graduated the past three semesters “didn’t get to have the experience” they deserved and that it was important for them to know that “everybody values them and cherishes them.” 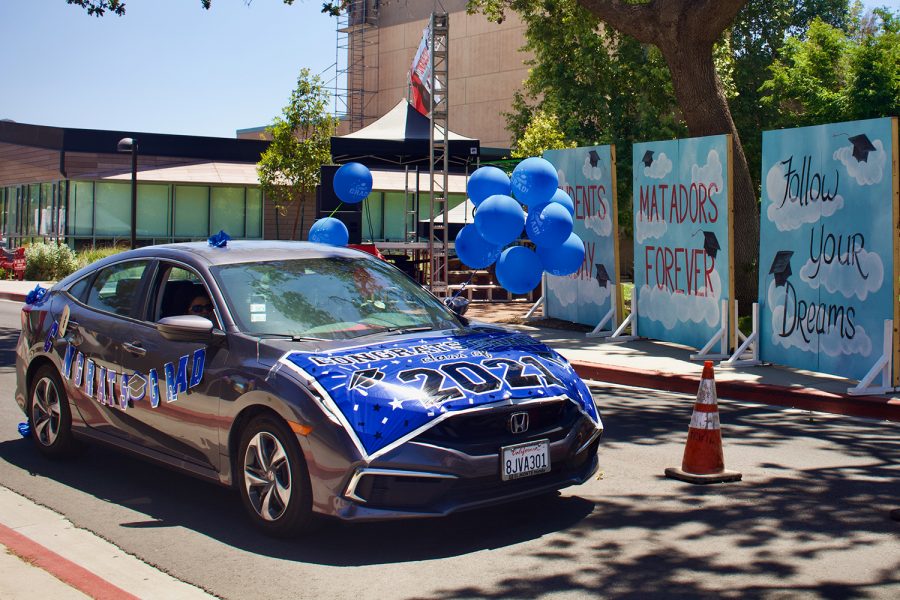 Gallery|4 Photos
Briana Walden
Many graduates decorated their cars with graduation banners, signs and balloons in order to stand out during the CSUN Grad Parade.

The COVID-19 pandemic upended nearly every aspect of life for college students across America in the past year. Lectures moved from bustling classrooms to Zoom meetings and buildings fell silent.

Graduation season has now obviously been transformed as well. The parade followed a virtual commencement held on May 15 that was streamed on YouTube and Facebook. The event featured both on-campus and pre-recorded video, which included speeches from CSUN President Erika D. Beck and U.S. Sen. Alex Padilla.

“Know that as we gather here today virtually, the tens of thousands of people who would have been physically gathered on campus to cheer your accomplishments are here, and we are cheering for you,” Beck said. “Yes, campus is quiet today, but the collective enthusiasm in celebrating you has not diminished.”

The parade does, however, seem to be a compromise made with pandemic-fatigued graduating students, who lobbied for in-person ceremonies and felt that yet another virtual one would not suffice.

Students began a Facebook group and a petition urging the CSUN administration to rethink graduation and offer more in-person ceremonies.

Some students expressed dismay at losing the chance to walk across a stage and receive their diploma. The change has affected first-generation college students in particular.

“I feel like considering the population at CSUN, they’re people of color, a lot of us are first-generation college students,” said Vanessa, who is graduating with a master’s degree in social work and is the first person in her family to graduate. “I feel like it’s so important to celebrate that milestone.”

CSUN initially planned for a virtual commencement and ceremony, but on March 30, Vice President of Student Affairs and Associate Dean of Students William Watkins sent an email stating that “there has been interest in updates on the university’s commencement plans” and that updates on additional on-campus events would be announced shortly.

On April 9, Beck sent out an email announcing the car parade for the over 22,000 students that make up the 2019-20 and 2020-21 classes. The email also announced that students from the graduating classes of 2020 and 2021 classes will be given the opportunity to participate in next year’s commencement ceremonies on campus and in-person.

“I was overjoyed that they agreed to give us the option to wait, but others online are still upset and say it’s still not enough,” said CSUN graduating senior Veronica Mireles. “Especially considering Long Beach and other schools are renting out stadiums for socially-distanced ceremonies.”

Mireles said that many students called on CSUN to do this same for this year’s ceremonies. In an email sent to her by Watkins, he cited that the size of the graduating class and lack of access to a stadium in the San Fernando Valley were among the factors preventing such an event from happening this year. 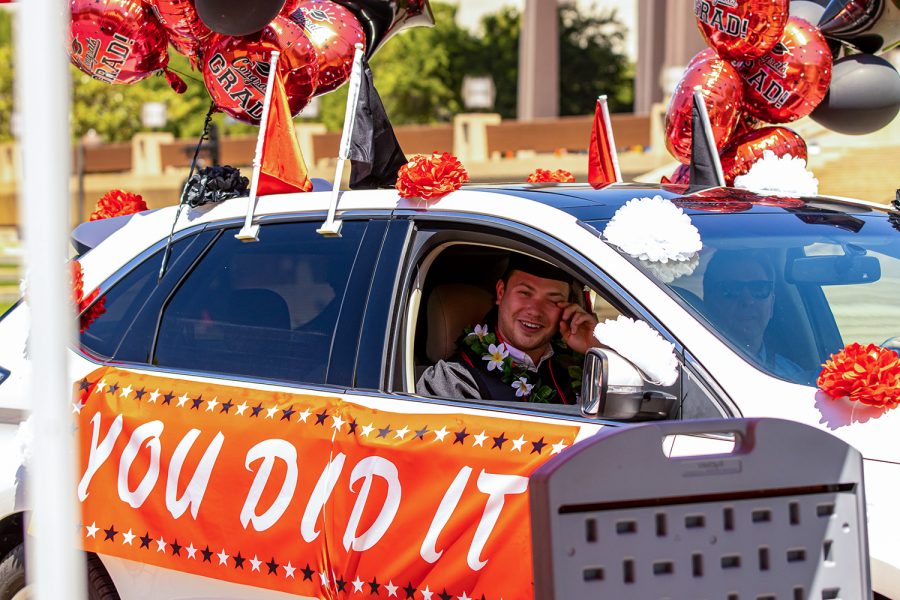 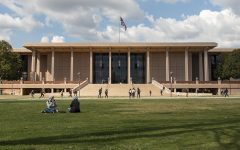 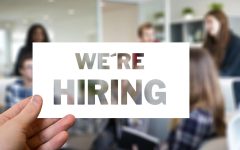 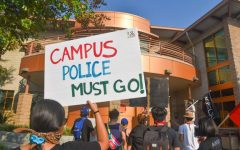 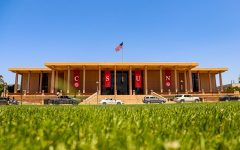 CSUN announces return of in-person commencement ceremony for May 2022 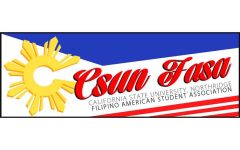 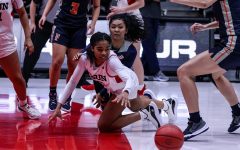 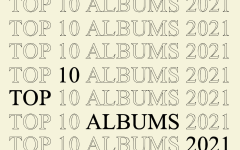 Top 10 albums of the year