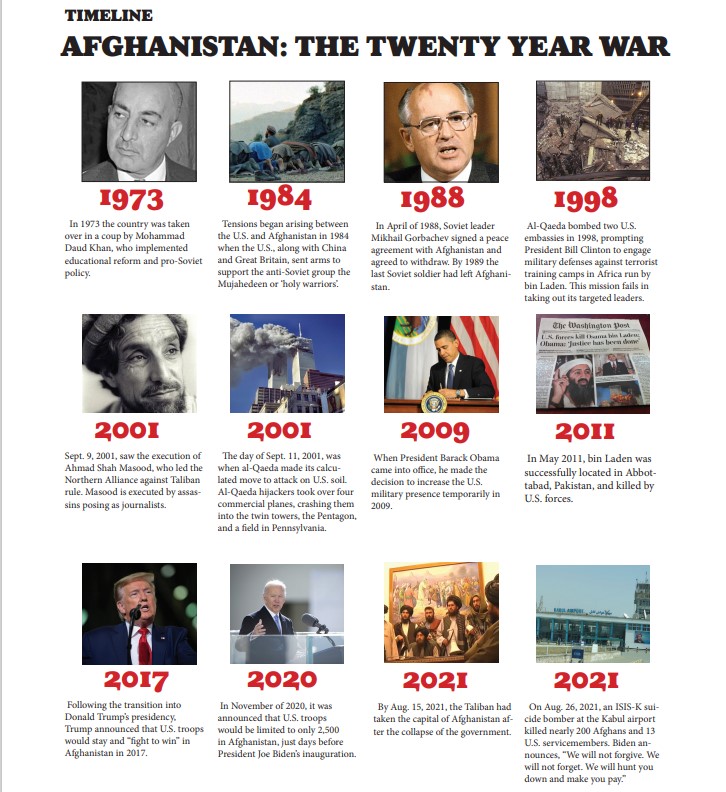 The Twenty-Year War: A Timeline of Events

The war in Afghanistan has been a large part of the last two decades and is often a misunderstood topic of debate. Also known as America’s longest war, the conflict and American involvement came to a close in August of this year.

Removing U.S. troops from the capital of Kabul on Aug. 30 sparked international outrage, in addition to shocking images of the chaos that ensued. The question on many minds is how did this state of affairs end up in this climactic conclusion?

The American conflict in Afghanistan began long before the tragic events of Sept. 11, 2001. During the late 1970s and early 1980s, Afghanistan went through several power struggles as many tried to gain sole leadership of the country.

In 1973, the country was taken over in a coup by Mohammad Daud Khan, who implemented educational reform and pro-Soviet policies.

Khan sought to cut ties with the Soviets and diminish the dependency on their support by declaring Afghanistan an independent republic.

Khan served as president of Afghanistan until 1978, when he was killed in a coup and succeeded by Nur Mohammad Turaki, who ushered in a communist government under his rule.

In 1979 the Soviet Union invaded Afghanistan as a show of power and a way to boost support for the dwindling communist regime.

America’s involvement began in 1984 when the U.S., along with China and Great Britain, sent arms to support the anti-Soviet group the Mujahedeen or ‘holy warriors’.

According to the History Channel, Osama bin Laden and other jihadists from the group Al-Qaeda continued their holy war against the Soviets. In April of 1988, Soviet leader Mikhail Gorbachev signed a peace agreement with Afghanistan and agreed to withdraw. By 1989 the last Soviet soldier had left Afghanistan.

In 1995, the newly-formed islamic militant group the Taliban gained control over the country and used the assurance of peace to gain favor. Under Taliban rule opium cultivation is outlawed, education of women is limited, and crime is given stricter consequences.

By 2000 bin Laden was largely considered a terrorist and was rumored to be hiding in Afghanistan, recruiting and training followers in terrorist training camps. At this time the U.S. demands that bin Laden be extradited and stand trial for his involvement in the embassy bombings.

The Taliban refuses the request and has sanctions put upon them by the United Nations, which restricts their trade abilities.

On Sept. 4, 2001, the Taliban put eight international aid workers on trial for the crime of spreading Christianity. The punishment for this crime under Taliban rule is execution. After serving time in multiple Afghan prisons, the eight prisoners were released on Nov. 15, 2001.

Sept. 9, 2001, saw the execution of Ahmad Shah Masood, who led the Northern Alliance against Taliban rule. Masood is executed by assassins posing as journalists.

The day of Sept. 11, 2001, was when Al-Qaeda made its calculated move to attack on U.S. soil. Al-Qaeda hijackers took over four commercial planes, crashing them into the twin towers, the Pentagon, and a field in Pennsylvania. In the days after the attack, it was declared by President George W. Bush that the wanted terrorist bin Laden was a prime suspect in the attacks.

After demands for relinquishing bin Laden went unanswered by the Taliban, the U.S. and British military forces began to bomb Taliban targets in Afghanistan.

From 2001 to 2008 under the presidency of Bush, U.S. forces focused on defeating Taliban forces and rebuilding the Afghan government.

When President Barack Obama came into office, he made the decision to increase the U.S. military presence temporarily in 2009.

In May 2011, bin Laden was successfully located in Abbottabad, Pakistan, and killed by U.S. forces.

Obama announced a planned timeline to reduce the amount of U.S. troops in Afghanistan in 2014.

Following the transition into Donald Trump’s presidency, Trump announced that U.S. troops would stay and “fight to win” in Afghanistan in 2017.

Trump rescinds his peace talks with the Taliban and Afghan leaders in 2019 after an American soldier, along with 12 others, are killed in a Taliban attack.

In Feb. 2020 Trump eventually signed a peace agreement with the Taliban, which includes the complete withdrawal of all U.S. military forces from Afghanistan by the spring of 2021. The Afghan government is not included in the negotiations.

In November of 2020, it was announced that U.S. troops would be limited to only 2,500 in Afghanistan, just days before President Joe Biden’s inauguration.

Biden announced in April 2021 the complete withdrawal of U.S. troops from Afghanistan, ending the ‘Forever War’ by Sept. 11, 2021.

In July of 2021 U.S. left the airfield in Bagram, Afghanistan, and did not tell its new base commander.

By Aug. 15, 2021, the Taliban had taken the capital of Afghanistan after the collapse of the government.

On Aug. 26, 2021, an ISIS-K suicide bomber at the Kabul airport killed nearly 200 Afghans and 13 U.S. servicemembers. Biden announced, “We will not forgive. We will not forget. We will hunt you down and make you pay.”

After 20 years of conflict, over 2,500 U.S. lives lost, and over 71,000 Afghanistan and Pakistan civilian lives lost, the war in Afghanistan will undoubtedly hold a somber place in U.S. history. As the world turns anxious eyes on the current power in Afghanistan, it isn’t unusual to wonder: What’s next?