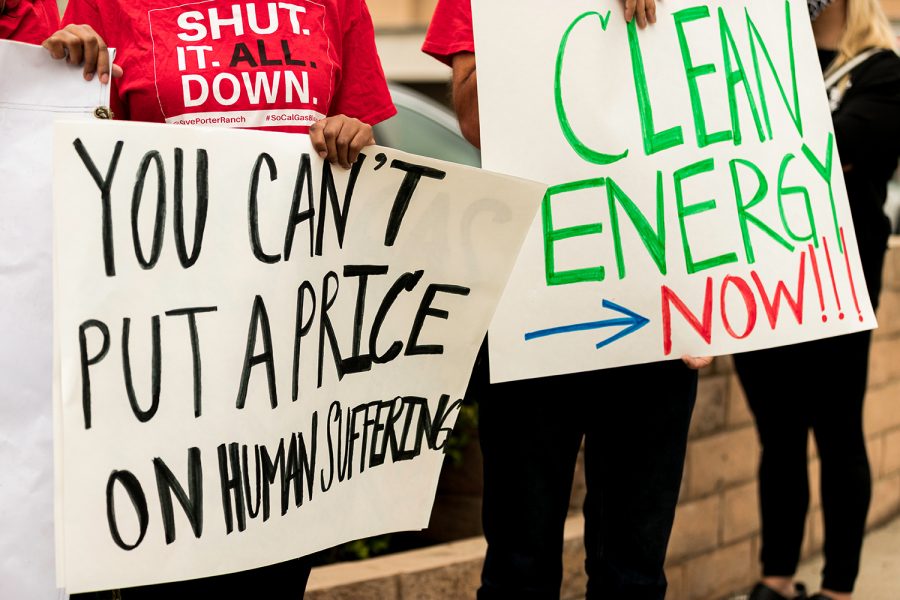 Protesters hold signs in support of closing SoCalGas’s Aliso Canyon gas storage facility and transitioning to clean energy during the “Rally to Shut Aliso Down” protest in Porter Ranch, Calif., on Tuesday, Sept. 28, 2021.

California is known as a national and even world leader in environmental protection, but not many know the deep rooted history that environmentalism plays in its history, dating back to the state’s inception. But as the climate crisis worsens, we can all use a reminder of how far the Golden State has come.

California’s conservationist roots sprouted with the Yosemite Grant of 1864, which established the first federally protected and preserved public land in the United States. The first official national park, Yellowstone, was established in 1872.

By the determination of a small coalition of farmers, the North Bloomfield Mining and Gravel Company was sued over damages caused to farmland in the Central Valley. The company was sued over the ecological damage produced by the use of hydraulic mining, a practice where high-pressure jets of water are used to dislodge rock material or move sediment.

More than half a century later, California would face its greatest challenge yet. In the first half of the 20th century, the abundance of factories across the nation — due to the Industrial Revolution — produced a lot of pollution. The pollution increased cancer risk, pneumonia, and burning eyes and lungs.

Two years after the attack on Pearl Harbor, when citizens mistook the thick smog as a gas attack by the Japanese, efforts were made to counteract the persistent pollution. Nearby butadiene plants and smoke from factories were wrongly assumed to be the main source of the toxic air, causing the city to implement smoke regulation.

Scientists discovered that the enclosed topography, warm climate and a rapidly growing population exacerbated the smog pollution. Dutch chemist Arie Jan Haagen-Smit discovered that smog was mainly ozone gas and particulate matter that came from the burning of fuel and emission of hydrocarbon vapors, worsened by photochemical reactions with the sun. With these revelations, California took its next big steps toward its role as a leader in environmental action.

California pioneered another standard for the nation by establishing the first vehicle emission standards. This act had the ambitious goal of reducing hydrocarbon and carbon monoxide pollution from new motor vehicles by as much as 80%. A year later on Aug. 30, 1967, California’s elected leaders would enact the Mulford-Carrell Air Resources Act, which led to the creation of the California Air Resources Board. This established a unified statewide effort to fight air pollution.

The Air Quality Act of 1967 is the precursor for the Clean Air Act, the nation’s primary federal air quality law. While the Clean Air Act sets nationwide standards for how much cars can pollute, it also prevents states from creating their own standards. Congress allowed an exemption for California, granting it various waivers to set its own emission standards over the years as those standards have become more strict.

California’s next trailblazing policy would come after the inception of the National Environmental Policy Act known as NEPA. After the passing of NEPA in 1970, Gov. Ronald Reagan signed the California Environmental Quality Act into law. CEQA instituted a statewide policy of environmental protection, making environmental protection a mandatory part of every state and local agency’s decision making process.Yet some argue that CEQA has and is being abused by many to halt important projects, such as housing and homeless relief.

CARB took on the responsibility of monitoring and reducing greenhouse gas emissions. Starting with the world’s first restrictions on tailpipe emissions of greenhouse gases,which became the basis for rules issued by the Obama administration. That same year the state also established the nation’s most stringent and comprehensive renewable energy.
The mandate stipulated a goal of 20% renewable energy by 2017. The goal was changed to 20% by 2010 and subsequently to 33% by 2020 under then-Gov. Arnold Schwarzenegger’s term.

Global Warming Solutions Act of 2006, the most ambitious climate change legislation ever enacted in North America. The act establishes a comprehensive program to reduce greenhouse gas emission across the state. This act gave CARB the power and responsibility to regulate the state’s greenhouse gas emissions to the levels set in 1990 by 2020.

The state set a goal to reach 50% renewable energy by 2030. In 2018, with the approval of SB 100, California made history once again by setting the ambitious goal of committing to 100% clean energy by 2045. It sets a new precedent and standard for other states and nations to follow.

Preventing the production of future emissions isn’t enough. The planet is warming and the damages from it could be irreversible. Every measure must be taken to halt global warming and that means ending current sources of greenhouse gases.