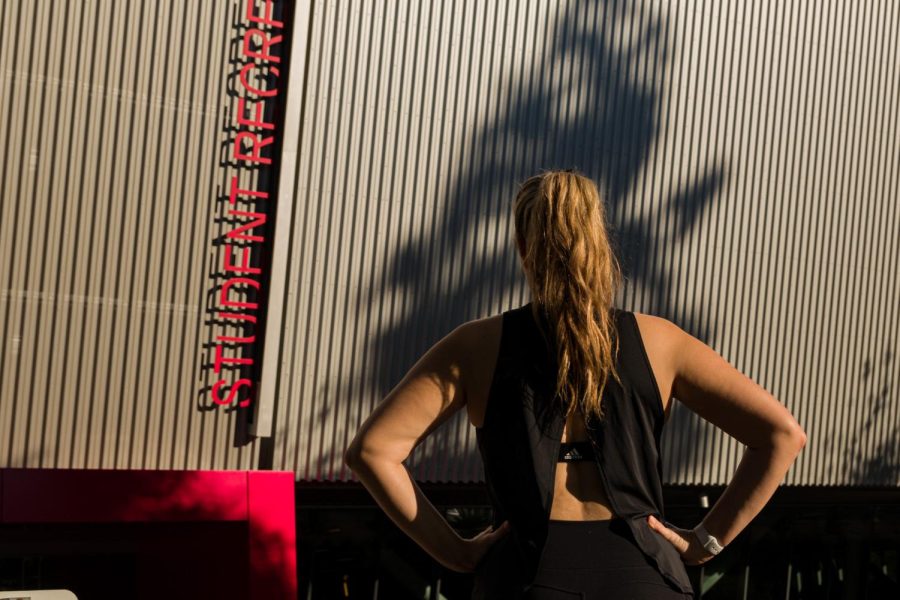 Too close for comfort: Dress codes do more harm than good

Not only does policing what women wear fail to keep them safe, dress codes can also affect their self-esteem.

At 27 years old, I was dress-coded for the first time.

It happened this summer when I was getting in a quick cardio workout at CSUN’s Student Recreation Center. I was just heading back to the locker room to change out of my gym wear when a staff member approached me. I took out my earbuds and heard her begin the conversation with an apology, but my gut told me that it was I who had done something wrong.

She informed me of the SRC’s dress code, that shirts needed to cover the midriff and that my top, which had an open back, went against this policy. She also explained how this was for my own safety so that creepy guys wouldn’t stare at girls. I nodded along, understanding that by going to workout there I had agreed to abide by this policy. After leaving that conversation, I didn’t feel safe. I felt small, embarrassed and sad.

It took me back to when I was first introduced to the concept of a dress code in 5th grade. At 10 years old, I was already struggling with body image issues. I was now being told by my teachers, adults that I trusted, that it was inappropriate to wear spaghetti straps or shorts that were shorter than where my fingertips laid against my legs when I held my arms to my sides.
I didn’t question it then, because I didn’t know any better. I accepted it.

I accepted it again in middle school when teachers would walk around during break periods with a yardstick in hand to make sure our clothes were dress code appropriate. If not, it meant going to the locker room to change into our gym clothes for the rest of the day. It doubled as a humiliation tactic, as peers would whisper about the swap to workout wear.

As my body began to develop, I became almost hyper-aware of the attention I was getting for my physical appearance. If I wore polos, they were buttoned up to my neck. If a top was low cut, I’d wear a tank top underneath. Sweatshirts became a feeling of safety. No wandering eyes came my way, internally I began to associate my self-worth with the way my body looked. And because I wasn’t happy with how I looked, I wasn’t happy.

It’s taken much of my 20s to work past that. When I first started college, I was so cautious about what I wore being of the assumptions one might make about me. If a top seemed too scandalous or seductive, I was worried bystanders might perceive me as a slut. These voices in my head didn’t come from nowhere. They were conversations I had overheard about classmates and I was terrified of those same comments being made about me. I lacked any confidence in my appearance.

This mindset only started to change when I started working out regularly. It allowed me to have a healthy relationship with my body because I was no longer viewing it with its worth to a man. I could see my body changing as I was getting stronger, both physically and mentaliy. I stopped caring about what I worried about what others were saying behind my back, because I had concrete goals in mind.

The gym had become my safe space, where I finally felt confident with my body. To be dress coded in a space that had brought such body positivity into my life made it all the more painful.

The SRC has since changed its dress code policy. However, as of writing this article, the policy still remains on their website “Appropriate clothing must be worn at all times throughout the SRC. Shirts covering the mid-section, including front, sides and back, are required. Bottoms covering the buttocks, genitals and pubic region are required. Clothes with zippers and/or any other feature that may damage equipment are prohibited. Clothing displaying profane or offensive material is prohibited.”

The only reason I was aware of the policy change was once the fall semester started, I noticed women in the gym wearing crop tops or sports bras in lieu of a shirt, with no staff members approaching them. In some ways, I was relieved, because I didn’t want the dress code to exist in the first place, but I couldn’t help but question why they had taken the time to approach me and not others.

I ended up going to a staff member to ask if the dress code was still in place, to which I was informed that they had updated the policy so that so long as private areas are covered, that as long as your chest and bottom are covered you can wear sports bras as tops and no length requirements on shorts.

Selfishly, I wish they had come to this decision sooner and had saved me the embarrassment I felt this summer. But I don’t think changing the policy is enough. The SRC, as well as other other facilities that have updated their dress code policy, needs to inform their patrons that a change has been made, and why. By ignoring that it’s been changed, we’re ignoring the problem and the toxic culture dress codes implement.

A woman can decide for herself what is and is not appropriate. To label a woman’s body as distracting is to limit their self worth to their body. We are more than that. We are leaders, we are fighters, we are caring, we are compassionate and we will dress however we please.