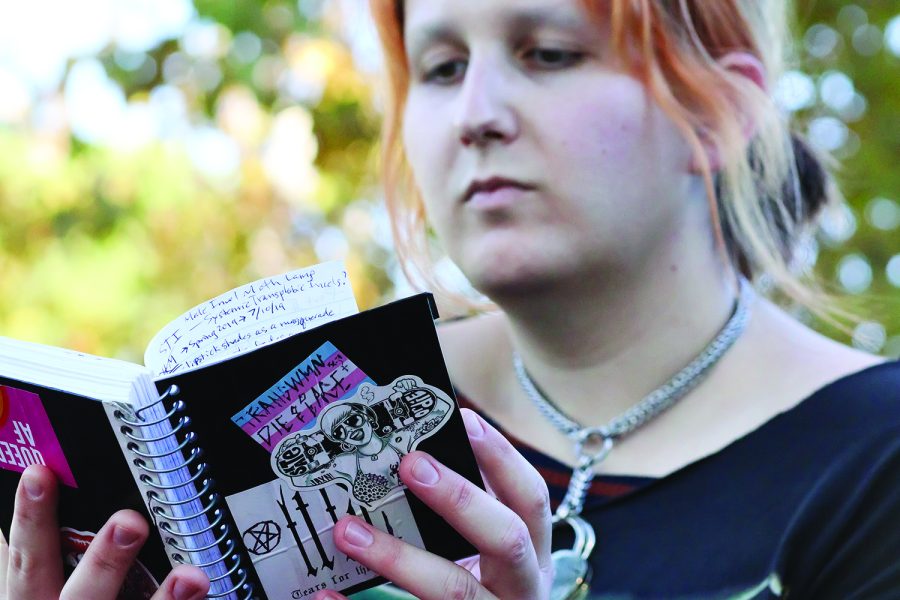 Jaqlynn Lyanna reads a passage from her personal journal full of song lyrics and poetry.

Twenty four-year-old Jaqlynn Lyanna is an artist, drummer, writer and barista, but what makes her stand out among women is the journey she took to feel comfortable being herself.

As a transgender woman, her experience redefines and expands the idea of what it means to be a woman.
“I identify as a woman, but I don’t want the version of womanhood by whoever created the words ‘woman and man,’” Lyanna said.

Lyanna takes a picnic blanket out of a bag, both of which were in red-and-black gingham — two colors that are meaningful to her. They were the colors of the dress she wore when she looked in the mirror and saw Jaqlynn Lyanna looking back for the first time.

She stood out from her peers from a young age. Her taste in music and personal style leaned toward a grunge aesthetic. Lyanna’s friendships began dwindling in middle school. She noticed the toxic behavior of the boys she used to hang out with. They would say, “that’s gay” when they didn’t like something. “Feelings are for girls,” her friend would tell her.

“I wasn’t fitting the norm or acting ‘manly’ enough,” she explained. “I had to perform and conform and it hurt me.” Lyanna described the next nine years as the time she went into hibernation. She found it hard to recall that point in her life because she was deeply buried under a masculine mask to survive high school.

Lyanna met her “found” family throughout college and in the punk community. They would give her makeup and gender-affirming clothes — a practice she continues to this day by paying it forward to those in similar situations like hers.

With her physical appearance finally matching who she was, Lyanna began to feel at home in her body. By Christmas of 2018, Lyanna felt that it was time to come out to her family, or as she prefers to call it — “let them in.” Some members of Lyanna’s family practice Evangelicalism, a branch of Christianity that does not look fondly on transgender people.

“I am letting people in to see a more authentic version of me,” Lyanna explained.

She made her announcement at dinner. Like taking off a bra at the end of the day, telling her family made her feel free. “It felt like I wasn’t suffocating anymore,” she said. A silence fell over the table as she finished. Her aunt and uncle stood up and left abruptly without saying a word.

Today, they regularly misgender her, use her dead name — the name she was assigned at birth — and tell her they are praying for her, which feels like nails on a chalkboard to Lyanna.

“All the bullying and hate from you own family, whether we are gay or trans or anything connected with identity —it screws us up,” Lyanna said.
She turned to drawing and song writing as a way to understand her role in the world. She pulls out her journals from the black mesh bag. They are filled with original song lyrics. There are sketches from a gender-inclusive comic book she is writing. Her characters have no set gender in a utopia where gender does not exist.

She wrote it because she didn’t see queer life in mainstream media growing up. None of the protagonists looked like Lyanna, so she was forced to identify with villains or side characters because they were the nonconformists. These characters were often “gay-coded,” meaning they embodied queer characteristics without explicitly confirming their sexual or gender orientations.

“They would be painted as someone who was very extravagant or flamboyant or the embodiment of a flaming individual who is just obnoxious and full of exaggeration,” she said. The media monitoring group GLAAD found that less than 7% of primetime broadcasts between 2005 and 2017 — when Lyanna was growing up and watching mainstream media — featured regular LGBTQIA+ characters.

One of the characters that stood out in her memory was the villain of “The Powerpuff Girls,” Him. Him wore devilish drag queen-inspired clothes, which reinforced the idea that anyone who looked like that was evil.

The lack of relatable characters left Lyanna feeling like a side character in her own life. Lyanna’s authentic self was hidden as she tried to fit into a social mold that was never made for people like her.

As Lyanna continued to explore womanhood, she let go of traditional ideals. She no longer felt the need to wear makeup everyday and took comfort in knowing who she is without the need to dress or act hyperfeminine. Though she found inner power, external forces were there to test her newfound strength.

Trans women face discrimination when they look for work. “Sex work is a way to get money because other businesses won’t have us, ” she explained. “That’s why many people believe all trans women are prostitutes.”

Lyanna worked in a sex shop where harassment was a regular occurrence. Customers would objectify her, as well as her Latina and Asian female coworkers because the pornography the shop sold hypersexualized women from those communities. Customers thought it was acceptable to use slurs or to ask them for sexual favors.

Some of the pornography’s violent and racist themes bothered Lyanna, so she decided to hide those DVDs in the back of the shop. Her manager found out and fired her. She knew this was something beyond just losing a job. The incident made her realize the need to take action against the mistreatment of fellow women and combat the mindset that women are hypersexualized objects.

As Lyanna says, “Our journeys may be different but we’re all women, we’re all in this together and we get to decide what it means to be a woman, not a man.”