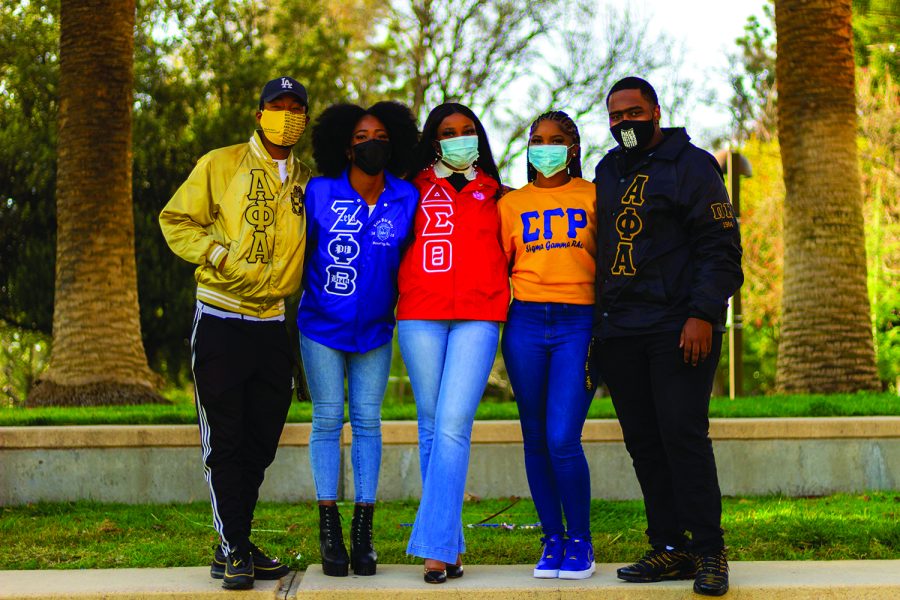 National Pan-Hellenic Council members from each organization active on campus pose with each of their hand signs and letters in front of the University Library on Jan 14, 2022 in Northridge, Calif.

Kayla Simpkins has grown up hearing about Greek life, specifically from her cousin and sister. Malaysia Long’s fourth-grade teachers had introduced her to Greek life, and Derrick Lewis heard about it in high school when members of Greek organizations visited his campus. Their journeys to joining fraternities and sororities have all been different, but the common thread between these three is that they now hold executive positions in their Black Greek organizations.

“These organizations provide history from a time in which members of the Black community were not accepted elsewhere,” said Long, secretary of CSUN’s Sigma Gamma Rho Epsilon Phi chapter. “[Black Greek letter organizations] provide a safe space for those members to learn and [dive deeper into] their culture.”

It has been easy for the Greek life community to exclude men and women of color throughout history. Black students were not allowed to join Greek organizations in the early 1900s during segregation, which led them to establish separate Black organizations that became the foundation of Black Greek life. One of these organizations was the National Pan-Hellenic Council.

Established at Howard University in 1930, the National Pan-Hellenic Council was created to unite Black students as they fought for equality within their universities. It consists of nine historically-Black Greek letter organizations, referred to as the Divine Nine, that govern the houses within Black Greek life. Most of the Divine Nine started as study groups or community spaces for Black students at their universities, but have now grown into international organizations.

“Black Greek life encompasses lots of things, such as the creation of a community for those that are consistently misrepresented,” said Lewis, the secretary of CSUN’s National Pan-Hellenic Council and president of Alpha Phi Alpha. “[There is] lots of culture projected through stepping and dances we called strolling, and lots of rich history of people that have worked hard to create opportunities for Black people, as well as breaking the generational curses that were systematically put in place.”

CSUN currently is home to its own National Pan-Hellenic Council, with each executive board member representing their respective Divine Nine fraternity or sorority chapter. Alpha Phi Alpha, Sigma Gamma Rho, and Zeta Phi Beta are just some of the organizations that keep Black Greek life at CSUN alive, alongside others outside of the Divine Nine.

For many of those involved, the unity among organization brothers and sisters is only one fraction of their love for this community. The dedication to community service, sense of identity, and empowerment shown through traditions like their rhythmic dancing draws Black students towards Black Greek life while providing them with a support system seen in very few corners of the university, according to Long.

“To me, Black Greek life encompasses a different and stronger form of sisterhood and brotherhood,” said Long. “There is always support and guidance from others within your organization and beyond.”

Many BGLOs at CSUN even collaborate with groups like the Black House and Black Student Union to host community service drives and educational events where Black students can have a safe space to discuss topics such as Black self-love and safe sex practices.

“We’re using our space to kinda amplify and echo what’s happening in the world while allowing them a space where they can vent, learn and share their perspectives,” said Simpkins, president of CSUN’s Zeta Phi Beta chapter.

Despite all of the work BGLOs do for their community, they still feel the effects of negative stereotypes regarding Greek life. Stories of students being seriously injured or dying due to harmful hazing practices have driven many people away from Greek organizations.

Many groups, like Zeta Phi Beta, do not allow hazing, but the distrust of Greek organizations still has an influence on their recruiting efforts. Simpkins believes that these stereotypes, combined with a lack of support from CSUN, the lack of knowledge about Black Greek life, and the small population of Black students on campus, make recruiting a lot harder for BGLOs at CSUN.

However, these organizations still thrive, according to Simpkins. She notes that they place more importance on how they leave their mark on CSUN through the work they do, rather than focusing on the amount of members they have.

For organizations like Zeta Phi Beta and Sigma Gamma Rho, the ways they leave their mark include providing an environment where young Black women can grow academically, personally and professionally without being overshadowed.

The spring semester brings more opportunities for Lewis, Long and Simpkins to continue uplifting CSUN’s Black community through their organizations. Whether they’re tabling for recruitment or stepping across the campus for their yard performance, BGLOs have made a home for themselves at CSUN and aim to keep Black Greek life alive in Northridge.

Info box for end of story–added by Michaella via maglab
The national Panhellenic council, which includes the nine historical Black Greek letter organizations, pushed for a lifetime commitment to the organization upon membership. It aims to assure sister/brotherhood, scholarship and service. If you are interested in learning more about CSUNS NPHC you can reach out to them on Instagram at @csun_nphc