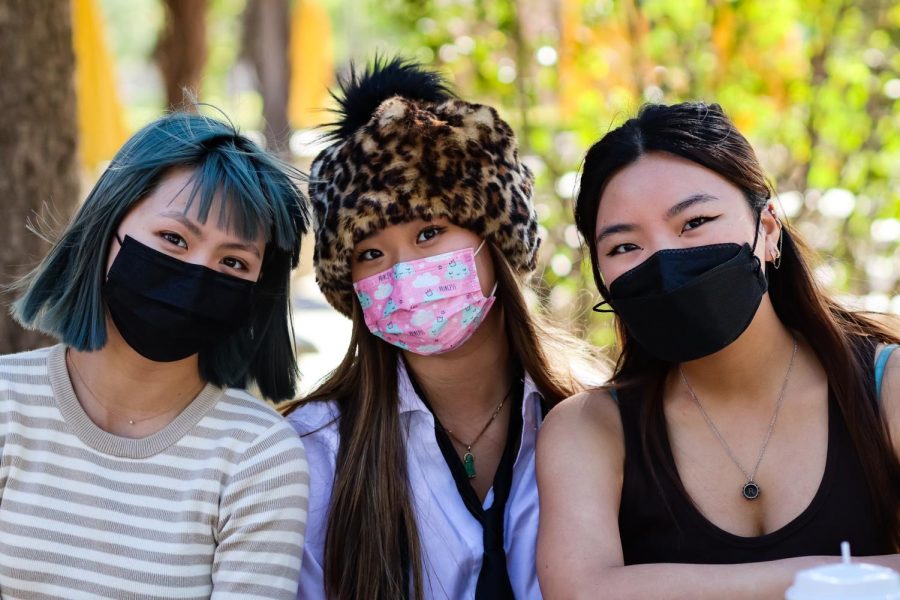 Gallery|4 Photos
Kaitlyn Lavo
(From left) Yvette Tran, Leona Do and Rachel Hur sit on the outdoor patio of the CSUN Arbor Grill in Northridge, Calif., on Feb. 8, 2022. Tran finished up her class and joined the other two in the discussion about their views on online dating.

The Sundial asks: What pressures do you face on dating apps?

Tinder. Bumble. Hinge. OkCupid. Eharmony. Grindr. Plenty of Fish. The list goes on and on.

Skepticism that says online dating will die down is far from reality. According to an article in The Telegraph, 70% of couples in the developed world will meet online by 2040, up from 46% today.

However, is online dating for college students viable? Though online dating is expected to stick around in mainstream consciousness, there are risks involved. Shows like “Catfish: The TV Show” highlight ways in which people conceal their real identity in hopes of finding online love and connections.

In addition, online dating sites are not required to do background checks on their users. There are many people who use dating sites for nefarious purposes, many of which put users in danger. Gina Rushton of BuzzFeed News wrote about how a man in Australia sexual assulted a woman after he felt he was entitled to sex because he thought that is what Tinder was for.

It is important to see how CSUN students feel about dating in a new age of social media.

“To be honest, I think it’s dumb,” Sian said about online dating. “For a lot of people it probably did help, because I know some friends that met on Tinder.”

He sees how people can benefit from online dating, but he likes to meet people face-to-face. That is how he met his girlfriend of three years. They met outside Bayramian Hall after the two frequently saw each other between classes and work.

“I wasn’t connecting with people the way I wanted to connect,” said Magana. He once tried Facebook’s dating section, but kept finding people who lived far away.

He feels that dating is not a goal for him at the moment, but would pursue a connection with someone if the energy is right.

Hur also echoed her friend’s sentiment about online dating. She likes meeting organically, and notes that people using dating sites could have ulterior motives. “You never know what someone’s intention[s] are,” Hur said.

“They can skew their words in a certain way to best appeal to you,” Tran said about people on dating sites. She feels that the best way to know people’s real intentions is to meet them in person.

Throughout the interviews with students across campus, many shared similar feelings about online dating — it is not for them. Some recognized the dangers of meeting someone online, while others felt that meeting someone in person was more their style. If students on campus want to try the online dating scene, they should always be safe and aware of the pros and cons of using dating sites.