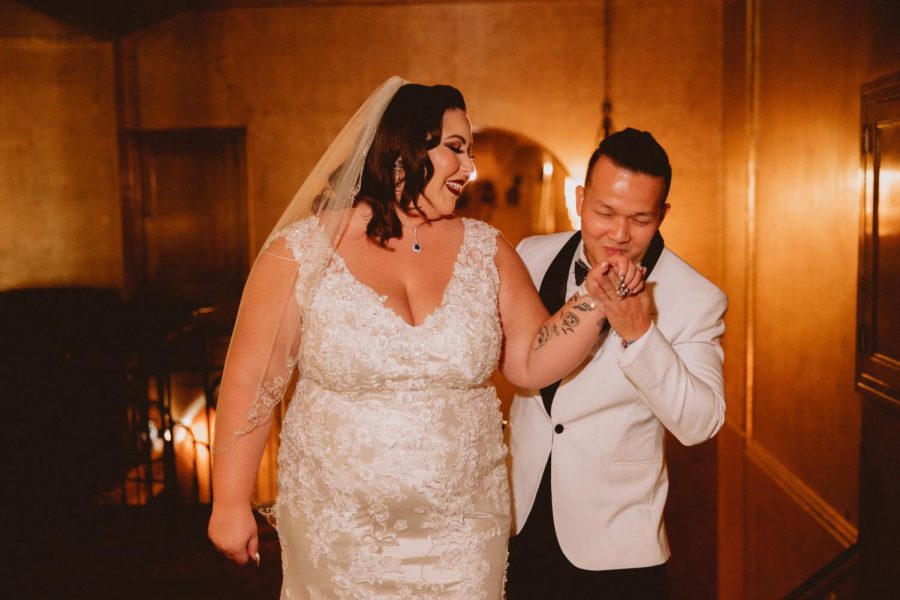 Quan Tran and Mercedes Cannon-Tran celebrate their wedding on Oct. 22, 2021, at the Cicada Club in Los Angeles, Calif.

Too close for comfort: From app to wed – A tale of online dating

The days of spontaneous and organic first encounters seem almost a thing of the distant past in the current dating climate. It seems like meeting others is easier than ever, with innovations such as social media platforms, speed dating on Zoom, and dating apps tailored to suit anyone’s needs.

With access to new people more streamlined than ever, it poses the question of how authentic is online dating? I am here to share that it may not be as dismal as it often appears.

I met my husband almost seven years ago in 2015 on a little-known app called Plenty of Fish. Like quite a few others, I was apprehensive about connecting with strangers online, especially in the pursuit of a relationship.

As I am sure is the case for many dating app users, I have my share of tales in the realm of online dating, ranging from comedic to flat-out horror genre. I had run into almost every kind of personality and background while navigating online dating, and even a few unbelievable characters. But when I met my husband, something was definitely different — in a good way.

We began chatting on the app. After several days, and some FBI-level investigating of his social media, I felt comfortable giving him my number and moving the first baby step. We then corresponded for over a week before deciding to meet in person, before our first date. I mean, I had to make sure he wasn’t a serial killer, right?

Great news: he was in fact not a serial killer. Our initial meeting was only supposed to be around 30 minutes to make sure both parties were in fact who they said. We ended up spending almost three hours talking and getting to know each other.

We mutually agreed the best thing to do would be to go on an actual first date, and so we did. Our official first date was the encore weekend of “Hollywood Horror Nights” at Universal Studios that year. After running for our lives and sharing our first kiss on the steps of the infamous Norman Bates “Psycho” house, we have been inseparable since.

We finally took our forever vows last October after having to move the date from 2020 to 2021, like so many other couples.

I still have to admit that when people ask me how we met, I am not always sure how to tell them we met online. I suppose part of me is a traditional romantic, and the idea that I actually met my life partner on an app seems almost unreal.

There are those on apps strictly looking for casual liaisons, and there are those genuinely searching for a romantic connection. How you differentiate between the two, or judge if one is masquerading as a connection seeker, is a million-dollar question.

As disappointing as this may sound, I am sorry to say I don’t have a definitive answer to that and can only offer subjective advice on the matter.

Be cautious, but know when to let your guard down. Be honest in what you want and don’t conform or adapt your desires for a possibility of a connection or fling. Lastly, have fun, because dating should not feel like a chore — though at times it does.

If there is anything to be taken away from my experience, I hope that it is this: there is always a chance for what you want if you are up for a bit of an adventure.