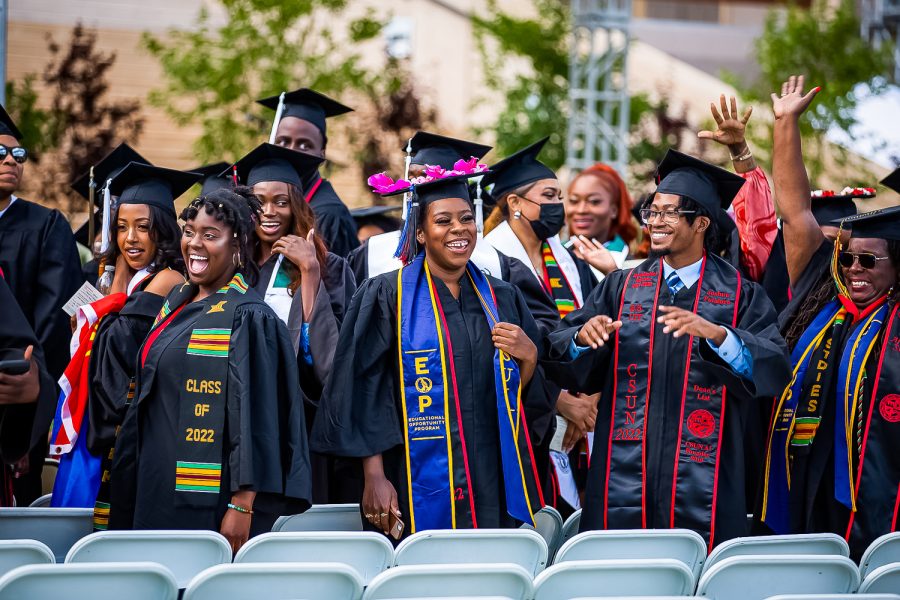 Gallery|15 Photos
Connor Clark
Graduates of the class of 2021-2022 smile at the friends and family in attendance during the 50th celebration of Black Graduation on May 15, 2022, in front of the University Library in Northridge, Calif.

Black Graduation celebrated its 50th anniversary at CSUN on May 15, 2022, on the University Library lawn.

This year’s Black Graduation holds special significance not only as a half-century-old celebration, but also for the ceremony’s inaugural awarding of the Margaret June Brown Scholarship, which occurred nearly four years after Brown’s passing.

The scholarship opportunity was presented by the Black Graduation Committee in recognition and remembrance of all that CSUN’s first director of the College of Humanities Student Services Center/Educational Opportunity Program accomplished.

In addition to Brown’s many accolades, including the receival of CSUN’s Don Dorsey Excellence in Mentoring Award in 2002, she also played a crucial role in the development and restructuring of Black Graduation. Her work shaped the way the program is run to this day, according to the CSUN myMatador Scholarships website.

“It speaks of the resilience and commitment to the ceremony from all who are involved,” said Gigi McGuire, the assistant director of student outreach and recruitment. “We will honor her legacy by awarding a deserving student with the scholarship for the 2022-2023 academic year.”

McGuire believes that the experience of Black Graduation is unique in comparison to other graduation ceremonies due to the influence of the students curating and participating in the event.

Graduates go to celebrate their academic achievements and enjoy cultural traditions, like the singing of the Black national anthem “Lift Every Voice and Sing.” Performances by student groups also commemorated the event, alongside traditional chants or calls, and steps or strolls, when students walked across the stage after hearing their name, explained McGuire.

“This was especially different during the times when the main CSUN commencement took place in one large ceremony, not divided by college,” McGuire said. “No one’s name was called. They would just say ‘college of business’ and the grads would stand from their seats. Black Graduation gave students that opportunity to be individually recognized.”

Black Graduation’s first ceremony in 1972 was an off-campus, post-commencement activity by the university’s African American community, specifically the Afro American studies department, students and staff. They wanted “to create a more intimate and personal graduation experience,” according to the “History of Black Graduation Ceremony” by Leroy Geter, retired associate director of student outreach and recruitment.

The ceremony wouldn’t be held on campus until the late 1970s.

Previous to being held on the University Library lawn, the ceremony took place at various other locations — Manzanita Lawn, the former Orange Grove Bistro’s lawn, and the University Student Union — noted McGuire.

“When I graduated and participated in Black Graduation, it was held in the USU Northridge Center,” said McGuire, a CSUN alumna.

Although the event is now known as an on-campus celebration, the ceremony is not officially financed by the university. Black Graduation has received support from various organizations and members of the CSUN community over the years, both financially and physically.

The celebration had numerous supporters from the Black community at CSUN throughout the 1980s and 1990s, according to Geter. Among the supporters were “the Pan African Studies Department, the Black Women’s Committee, the campus chapter of the California Black Faculty and Staff Association, and African American clubs and organizations affiliated with the Pan African Studies Department.”

This year’s celebration, however, is paid for with student participation fees and donations from alumni, staff and faculty, according to McGuire.

“The Black faculty and staff community, as well as key members in student affairs, support Black Graduation,” said Rashawn Green, director of the LRC. “Student affairs donates their time leading up to the event, as well as on the day of the event, and the Office of Student Affairs supports the program financially.”

For Green, McGuire and Dominique Moye, the importance of the ceremony extends beyond its yearly celebration and into the significance of being a Black college graduate.

“Historically, African Americans in our country were not able to receive a college degree,” said Dominique Moye, director of CSUN’s Black House. “So any time we see our Black Matadors receive a bachelor’s degree, it signifies a legacy for our community.”

Black Graduation is typically for Black students and those of African descent, but the celebration is known to accept any who wish to participate.

Those from African countries, African Americans, students from the Caribbean region — Haiti, Jamaica, Bahamas — and anyone who identifies as Black usually make up the participants, said McGuire. However, the event welcomes those who wish to show their support, regardless of ethnic background.

“It is all-inclusive. There are people who are not of Black or African descent, but are involved in the ceremony,” Green said.

Family, friends, faculty, staff, administrators and volunteers celebrating alongside the graduates give hope to students to complete their own degree, according to Green. Students are the driving force and the graduation is their vision, she added.

“I feel that it gives the Black community a voice and allows us to celebrate as a family and as a community connected by our shared cultural experiences,” McGuire said.